If you’ve been trying to get your hands on one of Microsoft’s 128GB Surface Pro tablets then the chances are that you’ve already come across some difficulties in sourcing a retail location that has them in stock. The majority of locations are showing that Microsoft’s powerhouse tablet is out of stock of the 128GB model, with minimal supplies of the smaller 64GB variant being available. The fact that users have acted quickly in snapping up the stock is bitter sweet for Microsoft. Great that there is a keen interest in the product, but potentially problematic, considering the official Surface Pro advertisement campaign has begun with the launch of "The Vibe" TV spot.

Microsoft’s official site is showing it as currently out of stock of the 128GB Surface Pro model, with a number of other high profile retailers also not able to keep up with the demand for the gadget from potential consumers. As the Surface Pro TV commercial goes live and starts to do the rounds around the world, a large number of people are actually wondering if Microsoft has been suffering from some kind of supply issue. 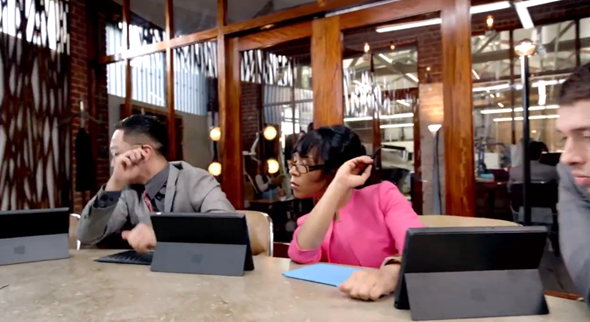 The Surface Pro advert that is now live has been given the title "The Vibe" and definitely has a strong focus on showing off the potential that the product has for business customers. The ad starts off with the familiar attaching of the tablet to the cover keyboard that we have become used to seeing with Surface RT commercials, but a great deal of emphasis being paid to the accompanying stylus and the portability of the product. Of course, all of this is displayed in the middle of a rather peculiar choreographed performance that would look instantly out of place in most company premises.

The advertisement, and the marketing that preceded it, seems to have generated significant interest in the powerful Microsoft tablet. With that said, there also seems to be some confusion about whether or not the company is having genuine supply issues or whether the lack of stock could be a marketing ploy to ramp up additional interest in the hardware. Make them keen, but make them wait has definitely been a successful tactic in the past, but it remains to be seen whether that is the game which Microsoft is playing.

Here’s hoping that the promise that Microsoft "are working with retail partners" to "replenish supplies as quickly as possible" doesn’t end up with customers waiting too long to get their hands on the Surface Pro.