Application launching on mobile devices has been an issue that many have been trying to address ever since the widespread use of smartphones became a reality a few years ago. Swapps is a new Android app that takes an interesting approach to app launching, bagging cues from Ubuntu’s Unity interface, more specifically the sidebar.

For those who have not used Ubuntu recently, the Linux distribution boasts a sidebar which is used to launch commonly used apps, making the process much easier for users with smaller screens and cluttered desktops (or both). Swapps takes this idea and implements it into Android in a way that is both useful and practical. 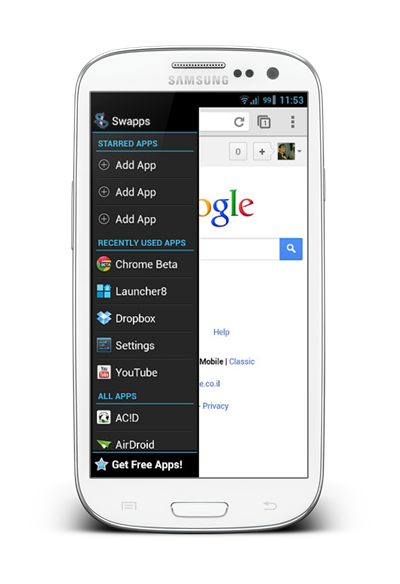 While not intended to fully replace Android’s home screen for launching apps, much like Ubuntu’s sidebar, it makes it much easier to launch apps without returning to said home screen, which is a great time saver. Once set up, Swapps can easily be brought up anytime by swiping your finger from the left-hand side of the screen. From there, apps will be divided into three handy categories: favorite or “starred” apps (where you can manually move up to 10 apps that you wish to get to more often), recently used (an automatically generated list of your 5 most used apps) and, if you aren’t feeling picky, the full app drawer is available as well, making it possible to launch any installed app directly from this handy launcher.

There are a few other bells and whistles that make this app a must try. For users who wish to grant app the system permissions to terminate background processes, it is possible to exit previously launched apps straight from the launcher, as a few to free up RAM and boost your battery life. At the same time, great customization options are present, making it easy for users to change the width and height of the Swapps menu. 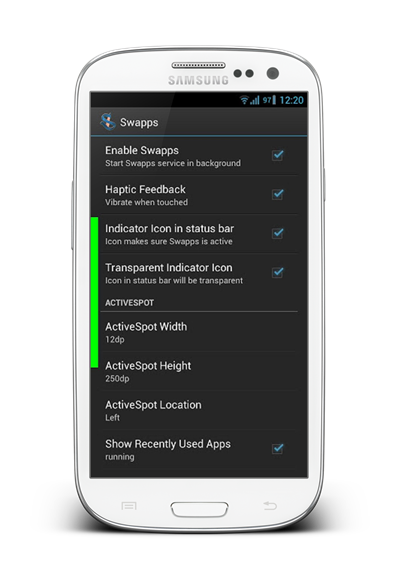 Swapps is available free of charge from the Play Store, so if you have been wondering how to use Android more efficiently, you may want to look at this.