Apple has certainly managed to gain the attention of the tech world with its two new iPhones, both of which were released to the consumer market towards the end of last month. The colorful iPhone 5c is the cheaper option, but the real party piece is the iPhone 5s, featuring an extensively improved camera, 64-bit processor and fingerprint sensor, among other niceties. Today, the first magazine ad of the new flagship has appeared, and as will probably be the case with much of the handset’s ad campaigns as we head towards the lucrative holiday period, the Touch ID fingerprint scanner is very much the focal point.

Naturally, the new security implementation has been described by some as a gimmick, and while there’s no doubt that the iPhone 5s’s marquee feature does bring that element of "cool factor" to proceedings, there’s plenty of evidence to suggest that also, it is very much an improvement on the traditional passcode. Not only is it more convenient and seamless to scan a fingerprint rather than proceed through the rather tedious rigmarole of tapping in digits, but it’s actually many times more secure, and although, on first impression, it may have come across as somewhat problematic and difficult to grasp, it turns out that Apple has put a lot of work into ensuring the process of configuring and using the feature is almost effortless. 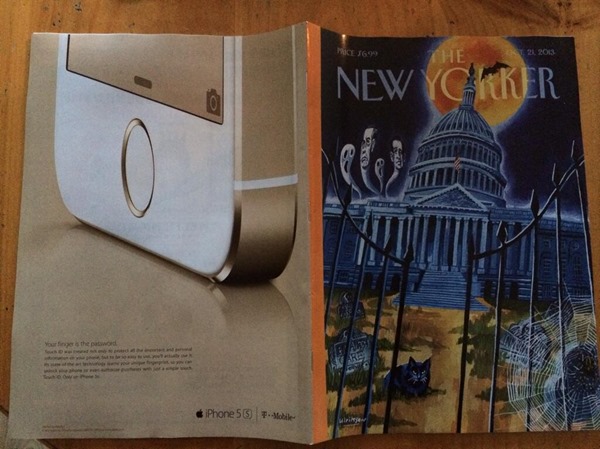 The new ad arrives courtesy of the back page of the The New Yorker, and gives a neat close-up of Touch ID on a gold iPhone. The shiny new color configuration has been at a premium in these early stages as consumers rush out to grab the unfamiliar shade, and with the Cupertino now finally close to getting on top of supplies, most looking to grab the gold iPhone 5s — or any iPhone 5s, for that matter — should be able to make an order without a particularly cumbersome wait. 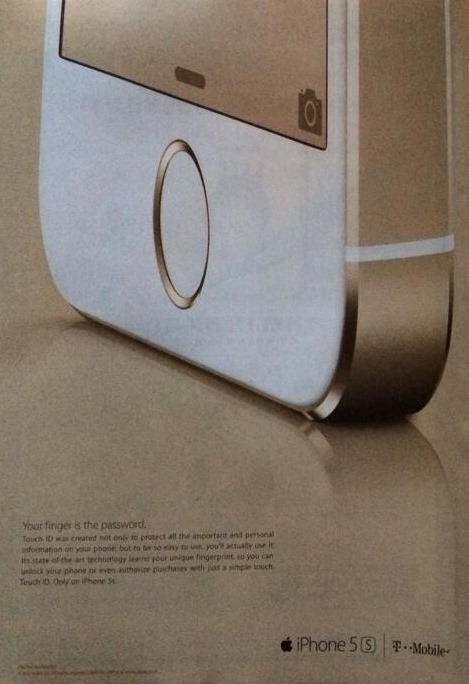 The iPhone 5c has been advertised a great deal since September 20th, and although many baulked at the price as being too high, seems to be finding its feet among those looking for something a little less expensive. But this is surprisingly the first time iPhone 5s has ever been advertised since launch last month. Hopefully in the coming weeks and months, we’ll begin to see the Touch ID-enabled handset in many more magazines, on billboards, and on the TV during commercials.