Find Fruit Ninja Boring On A Galaxy S III? Why Not Play It With A Real Knife! [VIDEO]

Fruit Ninja has grown to become one of the most popular games on both Android and iOS, and although most would not necessarily have foreseen it, the title has made a fruit-hating, sword-toting ninja of many millions of consumers.

The aim of the game is as easy to master as most of the more popular mobile titles; simply swipe your finger across the screen whenever you see a fruit, and said pineapple, pear, apple or orange will be slashed – obliterated by the sharp edge of your finger. The more fruit you manage to slash with each swipe, the more bonus points you can yield, although you must be careful to avoid the bombs which end the game. 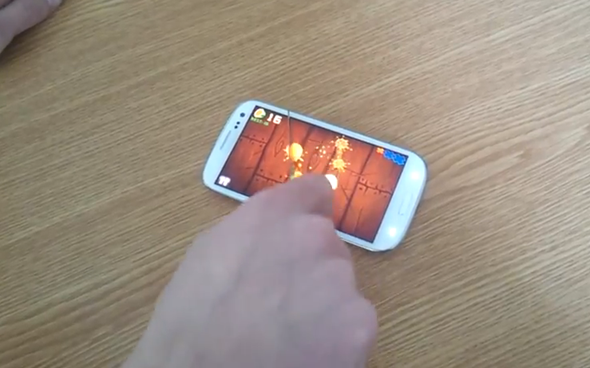 The game is certainly satisfying for the majority. After all, it has been downloaded millions of times both on Apple’s iOS, and Google’s Android platform, and with plenty of achievements, unlockables, and decent multiplayer support, it manages to keep the casual gamer interested for hours on end.

This wasn’t enough, however, for one particular mobile gamer. Going by the name of sandossou on YouTube, he has posted a video of himself playing Fruit Ninja, as he describes, "like a boss," by using an actual knife to slash the virtual fruit on his new Samsung Galaxy S III.

The device, which hasn’t yet reached much of the United States, boasts an HD AMOLED display, and while many early adopters are searching far and wide for an accessory to protect the Gorilla Glass 2 shell smeared over the screen, sandossou is slashing it quite happily with a kitchen knife.

Although it’s quite dangerous – he wouldn’t want to be caught playing like that on the subway, for example – it could get a bit more dangerous if he were to, say, use a Kinect sensor whilst waving the knife around like some sort of Wii controller.

Still, we’d never encourage that, nor would we recommend you start slashing your S III with a knife. The new glass fascia is as strong as ever – yet thinner – but if you’ve checked out the drop tests, you’ll know that placing any mobile device in unnecessarily precarious positions often only leads to one outcome.