The general availability of the iPhone 5 is the United States has certainly improved over the past couple of weeks. The initial rush saw the Cupertino company’s flagship device sell out rather quickly, but the waiting period of the much-sought device seems to be lessening as time has gone on. The on-contract iPhone 5 has sold in the tens of millions already, but those who’ve wanted the freedom of a factory-unlocked device have had to wait it out. However, a report over at AppleInsider suggests that wait might soon be over, and a search carried out this weekend for "iPhone 5 factory unlocked" on the US Apple site revealed the prices for the different configurations.

The United States tends to get the breaks when it comes to technology releases, but when it comes to unlocked iPhones, those Stateside are left waiting. In the United Kingdom and much of the world, consumers have been able to get their hands on an unlocked iPhone for weeks now, but carrier-free iPhones do not usually go on sale in the US until a few months, allowing carriers a free reign in the market. Given how the iPhone 4S unlocked began shipping in the third week of November – six weeks after the October 2011 launch – it’s safe to assume we could be nearing a similar release bracket once again.

With that said, the iPhone 5’s popularity has beset some constraints on the fruit company, so it might not be as cut-and-dried as history simply repeating itself. Still, there’ll be countless US customers desperate for the unlocked iPhone 5 to surface, and although the site leak doesn’t necessarily confirm anything either way, it’s still a promising indication that it isn’t too far away now. 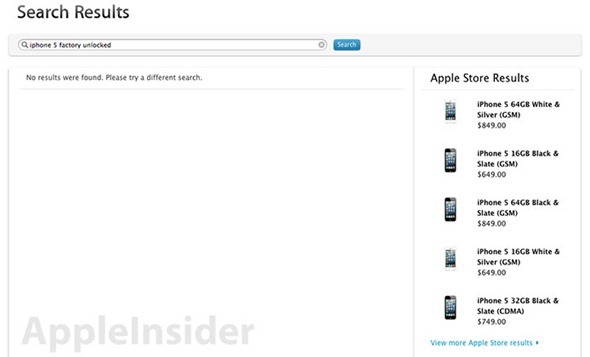 All smartphones – iPhones or otherwise – are unlocked when they are made, but due to the agreements vendors like Apple have with carrier companies, the majority of them are locked shortly after. It’s a move which benefits both Apple and your big carriers much more than it does the consumer, but if you can sit tight and wait for the unlocked smartphone to arrive, you’ll have the peace of mind that you’re not harnessed under anybody’s reigns.