Great news for Facebook users who either own an iPhone, iPod and especially an iPad. Facebook has finally taken the big step, all the videos on Facebook are now in HTML5 format, therefore you can now view them directly on your beloved iPad, iPhone or iPod touch. 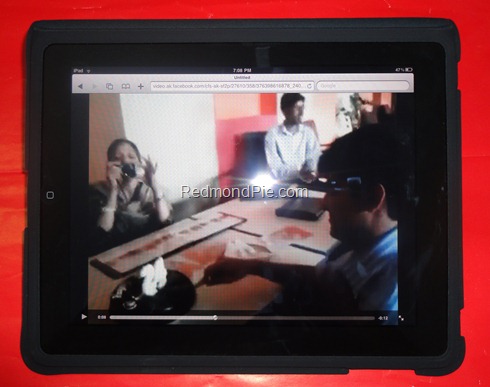 Viewing Facebook videos will now be a breeze! You will now no longer have to worry about video format, or pay for a third party app to play your videos. Hell, we don’t even need to wait for the next major update of Facebook App for iPhone to support this long awaited feature as starting from today, all the Facebook videos are in straight forward HTML5 (and NOT in Flash) format. You can now play them easily in Mobile Safari browser found in iPad, iPhone and iPod touch, just like how you can play YouTube videos on Facebook (supported in iPhone 3.2 for iPad and iPhone OS 4), directly within the browser without launching any other app.

Are all the efforts put in by Apple and Steve Jobs to push HTML5 as a standard in iPhone and iPad finally paying off? Is Flash approaching its end-of-life? Thoughts? [via MacStories]

UPDATE 1: As ReadWriteWeb correctly points out, it was actually transcoding in MP4, not HTML5.

In our tests this morning, it appears that Facebook isn’t actually using HTML5 to display the videos. Instead, what appears to be going on is that Facebook.com is detecting that you’ve arrived to the website via the Safari web browser on the iPad. When you then attempt to play a video on the iPad, it doesn’t play inline (something that would have been a clear confirmation of an HTML5 implementation). Instead, Facebook is linking out to the actual video, transcoded to MP4, a video format that plays on Apple devices.

We confirmed this by uploading a video file to Facebook in WMV format (a non-iPad compatible video format) and then attempting to play it on the iPad. It played as an MP4 file.