The Facebook messaging platform has been on aspect of the social network that has changed dramatically over the years. When Facebook first launched the service, it was driven by the upload of photographs and proved to be an extremely media heavy social gathering place and while that is still true, the built-in messenger functionality has been significantly beefed up recently. Facebook have also recently announced that they are making additional changes to the conversation streams within messages as well as putting a pay-to-message test in place with a subset of United States based users.

The announcement comes on the back of a disapproving public storm centered around the flip-flop changes in the Instagram terms of service, a company that Facebook officially acquired in August of this year in a deal said to be worth around $1 billion. As part of the messaging changes, the company is introducing a new set of filters that are designed to help users manage their inboxes with a greater deal of efficiency. Rather than have a rigid rules surrounding who can actually send messages to other accounts, the new up-front filters will allow greater control for users.

The new Basic Filtering options will allow friends and friends of friends as well as people on Facebook think you might to know to send inbox messages to an account. The Strict Filtering setup will remove the ability for people that the user isn’t connected with to send direct messages. If for some strange reason users are still receiving messages from users that they would prefer not to and the filtering settings aren’t preventing this then the "Move to Other" and "Report as Spam" options are still available,

In addition to the filtering changes, Facebook is also putting in place an inbox delivery test with a small set of users in America. Although worded in an extremely longwinded manner with reference being paid to the social and algorithmic flags that the network use to determine who can and can’t message to others, they are essentially trying to determine whether or not people would pay $1.00 to be able to guarantee that a message reaches its intended recipient regardless of the filters in place and the friendship connections. 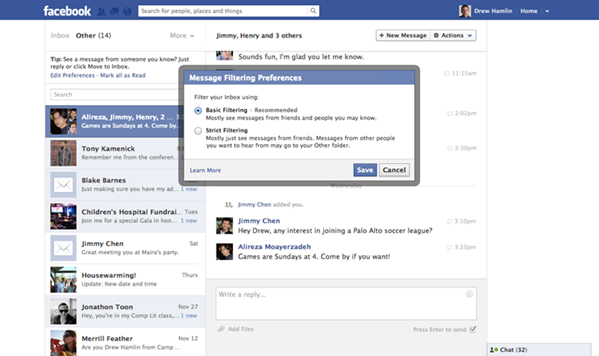 Users shouldn’t panic about Facebook messaging potentially evolving – or regressing as most will see it – into a paid service. The test is likely one avenue that the company are exploring as a potential revenue stream and has a good chance of being knocked on the head without actually rolling out right across Facebook.