It has been a rather busy past couple of months for Mark Zuckerberg and Facebook. With the News Feed revamp last month followed-up swiftly by the announcement of the Facebook Home for Android launcher late last week, the social network has just begun rolling out a brand new emotion feature to some users in the United States. Having initially run some tests back in January for the feature, which makes it easy for users to divulge their feelings, it looks as though it is ready for the public’s consumption, and should begin to reach nations outside of The States before too long.

Emoticons within text have long since been supported on Facebook, but this new feature allows for a larger emoticon to accompany the text written as a status update. So if, for example, somebody’s status denotes a particularly miserable or tumultuous occasion, they may want to select the sadface, which will in turn be clearly placed alongside the message in people’s Timelines.

It’s not a particularly groundbreaking feature by any stretch, particularly after seeing just how much time, effort and innovation the company has put into Home, but it does make it easier for users to convey how they are feeling.

If you do happen to live in the U.S., you should be able to use the feature right now, so why not head over to your Facebook page and give it a try and show your friends and family members what you feel like today? As mentioned earlier, these things don’t usually take too long to reach other shores, so if you’re logged in from another country besides the U.S.A., please sit tight and wait for the system to update accordingly. 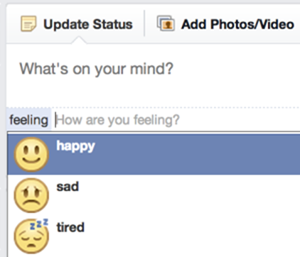 Personally, I dig the new feature. I can see how the introduction of these larger emoticons may grate on some folks, but ultimately, Facebook is a social network and, well, they’re pretty sociable faces!

What do you guys think? A bit too on the MySpacey side of the fence to your taste; or another innocuous but nice little addition to the world’s largest gathering of online buddies? Please do, as ever, share your thoughts and opinions via the usual mediums below – it’s always good to hear from you!