Like many jailbreakers, one of the very first tweaks I install upon jailbreaking a device for the first time is SBSettings. Its effortless toggling of any and every major setting within iOS is a commodity that cannot be enjoyed at stock level, but it’s certainly something quite a few of us would love to see right off the bat. Designer Ran Avni certainly seems to concur, and has dared to dream with a very elegant design bringing toggles for alarm, orientation, Wi-Fi and others right to the home / lock screen.

A notable portion of the tech world seems in favor of the opinion that Apple hasn’t really innovated enough with each new iOS revision, but with iOS VP Scott Forstall off the scene, it is also widely hoped that one Jony Ive will use his hardware design expertise to help restore iOS’s hampered reputation among the smartphone and tablet faithful.

Avni’s concept takes the form of a gray, right-aligned dropdown menu that is not only highly functional, but looks fantastic. Unfortunately, it appears as though it would be limited to the home screen and lock screen only, but we’d certainly love to see the concept extend in-app as well. Then again, seeing as the shortcut for the pane is located where the battery level indicator is currently situated, this would be difficult for most apps, since the status bar is not always on show.

There’s an endearing neutrality about Avni’s concept, and you feel that, even if Apple redesigned the entire OS from the ground up, this dropdown toggle-set would sill fit in just nicely. 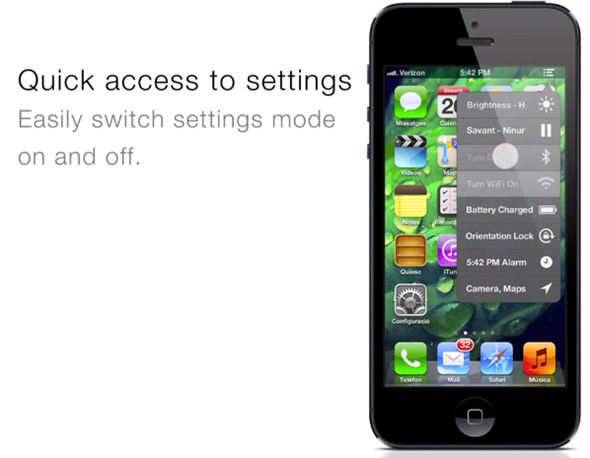 The ability to quickly switch Wi-Fi on or off, or readily adjust brightness to suit a particular app, is something we would all, to varying degrees, benefit from. I love the fact that, with SBSettings, a simple swipe and tap can quickly disconnect me from my Wi-Fi hotspot if it’s playing up, and likewise, connect me back up when my cellular connection decides to have one if its inconsistent moments, and I would love to be able to do as much without having to rely on the likes of Evad3rs.

What are the chances of this kind of thing making it to iOS 7? We’d have to say, pretty slim. SBSettings has been around for years now, while the idea of toggles may have been discussed, everything still remains, rather cripplingly, confined to the Settings app. Still, with Ive now in close collaboration with the software team, perhaps the traditional rulebook has been thrown out, and we can instead look forward to some significant improvements.

Thoughts, and how does it compare to the iOS 7 concept we discussed a few days ago?