When Apple’s first wearable – the Apple Watch – goes on sale on April 24th, flyers who use Emirates as their airline of choice will be able to use a new Apple Watch app as part of their flying experience.

In a press release, Emirates says that its app will be available on day one, pointing out that Emirates will be the first airline in the Middle East and African region to offer an Apple Watch app. 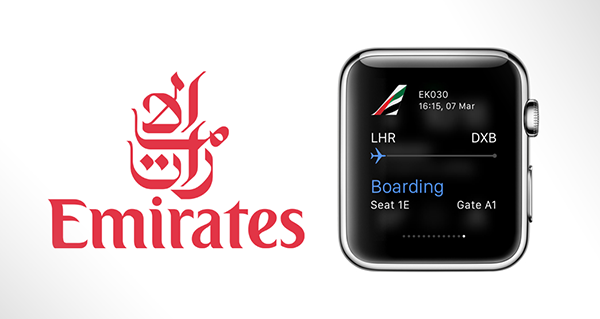 The list of in-app features that users can expect to take advantage of are exactly the kind that you would want from something sitting on your wrist. According to the company’s own press release, users will be able to get notifications of flight changes and delays while reviewing a list of their upcoming trips should they be a frequent flyer. Flight information such as departure gates and arrival times will also be available via the Apple Watch app.

“In today’s connected world, mobile technology plays an increasingly important role in the overall travel experience of our passengers. The Apple Watch platform allows us to connect with travellers on a more personal level by providing real time information throughout their journey,” said Alex Knigge, Senior Vice President, Digital at Emirates. The team behind the app wanted to make sure users had key information at a glance of the wrist, added Knigge.

The complete list of features, as outlined by the press release, are as follows:

The Apple Watch will be available to pre-order from April 10th with sales starting two weeks later. The Apple Watch is seen as Apple’s next big thing and it’s apps like the Emirates offering that could propel it onto the wrists of people around the world.

People will need more than an airline app if they are to be convinced of the watch’s worth though, and the next twelve months are going to be big for Apple and its latest release.