iOS isn’t short of a decent task-managing app, and as an individual with something of an affinity to a good time-saving, organizational offering, I found myself drawn somewhat to Due, a relatively well-established app which – along with a long list of testimonials, prides itself on simplicity.

As I say, it’s established, so has been around for quite a while. However, having just been updated to provide improvements to a purportedly smooth experience, I couldn’t resist giving the $4.99 app a test drive.

I don’t make a habit of paying such a high price for an app – particularly when I could currently purchase Infinity Blade five times over and still have a few cents left over, but with Gizmodo, TUAW and others queuing up to praise the app, I took the advice of The Reputables, and begrudgingly slipped Apple another drop in its vast ocean of cash. 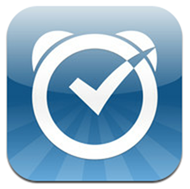 As it turns out, it was a pretty good gamble, and I would go as far as to say it’s the best five bucks I’ve ever spent. Its full name on the App Store is: Due — super fast reminders, reusable egg timers, and aside from being a bit of a tongue-twister, connotes a lot more than a simple to-do task manager. In fact, it’s absolutely nothing like your archetypal organizer, but more of a very elaborate, feature-rich amalgamation of the native Clock and Reminder apps. In fact, it trumps both, since the alarms and timers of Due are a lot more persistent and forthright in their quest to get you performing the task you asked it to remind you of.

Much like the snooze feature prevalent on basically every alarm, Due offers secondary alarms for reminders and timers, so whether you like it or not, the app will not be taking responsibility for your lackadaisical approach to task completion. Alarms will ring every minute until you open the app and shut them up, so even those seasoned procrastinators will need to stand up and take notice when Due comes calling.

The interface is clean and easy to navigate. There are three menus across the bottom; Reminders, Times, and Logbook, the latter of which keeps a tally of all your completed reminders.

In a nutshell, Due does what the Clock and Reminders apps do, but all in one hit. As somebody who would prefer to minimalize the number of apps used day-to day, Due does a great job of killing a few birds with one stone, in a much smoother app than even Apple’s associated native offerings.

Of course, the $4.99 price tag will be a massive off-put for many – if not most, but having tested Due out all weekend, it’s enabled me to disregard three or four other apps I previously deemed a necessity.

Well worth the money.

Download Due for iPhone, iPad and iPod touch [iTunes link]