The Galaxy Camera, while not technically a smartphone, is an example of the lengths to which Samsung has gone to appease the growing legion of snap-happy individuals, but its popularity has been stifled by its inability to make calls; requiring a user to essentially revert to the days of taking a phone and a camera out with them at all times. Now, thanks to the folk of XDA-Developers, the camera app of the Galaxy Camera has been ported through to the Google edition Galaxy S4, and while it won’t enable you to take as sharp a shot as last year’s standalone release, it will provide the supreme functionality.

When it comes to releasing smartphones at regular intervals, few can keep up with Samsung’s cycles, and far from simply releasing clones from one handset to the next, the Korean company has sought to broaden its target audience by applying different strengths to each device. The Galaxy S4 Zoom, for example, offers a happy median between premium smartphone and robust camera capabilities, but if you’re running the Google edition Galaxy S4 – the one running stock Android – and wish to broaden the snapper’s range of options, this port could be just what you’re looking for.

XDA-Developers member LastStandingDroid‘s port of the camera app of the Galaxy camera is compatible with Galaxy S4s running the untouched Google Edition firmware, as we’ve mentioned before, and while it’s a little rough around the edges as you might expect, plenty of the app’s main features appear to be working pretty well. As well as the ability to capture photos and videos, functionality such as flash, auto-focus and slow and fast motion are said to be in action, with the app supporting both the front and rear-facing snappers. 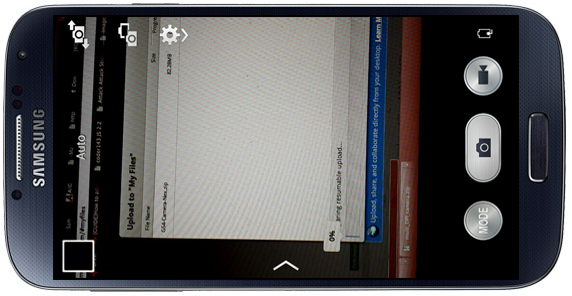 Since, as I say, the port isn’t quite perfection, must be prepared for some features to not work as billed. Elements such as Best Face, Burst Shot and Dual View are noted as unsupported at this point, and there is also a minor bug which will prevent your boot animation from showing. Yet still, it looks good for a first run, and if you’re a Galaxy S4 owner of the hacking variety – particularly if you’ve a vested interest in photography – you’ll probably want to give this a whirl.

If you fancy giving the port a go, head over to the official thread over at XDA to get started. The installation process is as easy as booting into recovery and flashing the provided ZIP file. That’s it.