Apple has officially released for download Public Beta 2 of macOS 10.13 High Sierra and tvOS 11 to testers registered on the Apple Beta Software Program.

With the correct credentials, macOS High Sierra and tvOS 11 Public Beta 2 can be installed onto compatible Mac and Apple TV hardware with immediate effect. 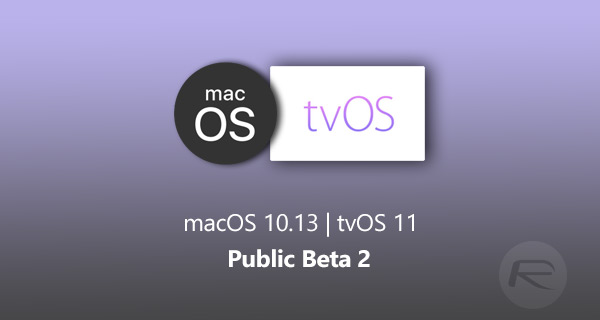 macOS 10.13 High Sierra beta 3: macOS High Sierra is not only the next-generation of macOS, but it’s also the next step in introducing an efficient and highly usable desktop platform. Those downloading and interact with macOS High Sierra can expect a platform with significant Safari browser improvements as well as an overhaul of the Photos app with new and powerful features. Apple has also focused attention on the native Mail app, improved iCloud File Sharing, and even introduced natural voice and expressions to Siri.

It may not necessarily be classed as a “feature,” but Apple has also ushered in the Apple File System (APFS) to replace the historical HFS. Other improvements include iMessage syncing, the ability to add tables into Notes app, and H.265 HEVC support.

For those who are ready to get to grips with the second public beta preview, which is essentially same as beta 3 released to developers, it can be downloaded and installed from Mac App Store right now. For those who are trying to install macOS High Sierra public beta for the first time, they can follow our guide on it here: Download macOS 10.13 High Sierra Public Beta 1 And Install The Right Way, Here’s How.

tvOS 11 beta 3: tvOS 11 is exciting, but it not as impressive or comprehensive as some of the other changes to major platforms introduced by Apple. Apple has introduced features like a new automatic light and dark mode which sets based on the time of the day that the device is being used. This is in addition to a new Home Screen Sync feature which allows a user to sync a Home screen layout with iCloud and display across multiple devices.

There are a few more inclusions within tvOS 11, but the improvements are simply not as major as the features added to iOS 11.

tvOS 11 public beta 2, which is same as beta 3 for developers, can be grabbed as an OTA update from Settings section of tvOS on Apple TV which has configuration profile for Apple TV installed.