For those of you who are involved in the business of modifying, tweaking or tinkering with the Android operating system, you will more than likely be aware of certain recovery methods and solutions which make an attempt to use the touchscreen display of the device for navigation purposes. You will also more be aware that until now, the offerings out there don’t exactly do a good job of touchscreen implementation.

If you have no idea what I’m talking about, then maybe you aren’t modifying your device as much as you possibly should be. In all seriousness, all Android devices contain a recovery console, which is essentially just a partition on the phone or tablet’s internal memory and can be manually booted into. As is, usually the way when it comes to these kind of things, the official ‘stock’ options are very limited and allow things like a factory reset of the device and using an official ROM to recover the OS. In some circumstances that is all that is required, but for the more hardcore Android tinkerer, additional, more powerful options are needed. 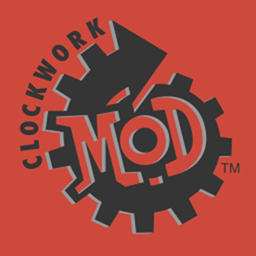 ClockworkMod is one of the better known, and widely adopted custom recovery for Android devices due to its availability for most phones and tablets. ClockworkMod is also developed by Koushik Dutta, who is the same developer who has recently been considering bring an alterative, Cydia-like application store to modified/rooted Android devices. In his latest release, Dutta has sent out a beta version of a modified ClockworkMod recovery which negates the need for any of the hardware based buttons on an Android device, and allows users to navigate through the recovery options using only the touchscreen.

In its current form, the modified CWM recovery isn’t exactly an aesthetic masterpiece, but it stands as an early beta and proof of concept from Dutta promising better graphics and visual improvements at a later date. If you are the owner of a CDMA or GSM Galaxy Nexus, or a GSM Nexus S then you can shoot on over to the ClockworkMod Google+ page and download the necessary .img files which are being hosted there.

The installation process to allow the use of the CWM tool on a permanent basis is a relatively simple one, just follow the five steps below:

Step 1: Head on over to the official ClockworkMod Google+ page and download the necessary .img file for your Galaxy Nexus or Nexus S.

Step 2: Make sure to boot your device up into Fastboot mode. This is achieved by powering off your device, and then powering back on whilst holding the volume up and down buttons together.

Step 4: Reboot the device into the operating system (fastboot reboot).

Step 5: Once the reboot is complete, you now have the ClockWorkMod recovery installed on a permanent basis.