Amazon has now officially released the dedicated Amazon Prime Video app for Apple TV, as announced in the first instance back during this year’s Worldwide Developers Conference (WWDC) in June.

Heading into WWDC, we had a fairly good idea of what was going to be announced before Apple unleashed its Internet engineers on the development community for a week of talks and workshops.

We had been privy to slight visibility on the native Amazon Prime Video app for Apple TV prior to the event, but with discussions between the two companies still ongoing at that time, it wasn’t a guarantee that Apple would lift the covers off of the app. History shows us that we did actually get an early announcement of the existence of the app, but we now have full access to the platform via the tvOS App Store.

The first thing of note to mention here is that Amazon’s new addition to the tvOS App Store offers full compatibility with the latest Apple TV 4K, which means it supports 4K+HDR content. The existence of Apple TV 4K, as well as this new native app directly from Amazon, should definitely help Apple pull back some of that vital market which is dominated by Roku, and, quite ironically, Amazon with its own Fire TV and Fire TV Stick hardware.

In addition to Apple TV 4K support, the new Amazon Prime Video app gives us pretty much what we would expect from an app of this nature. 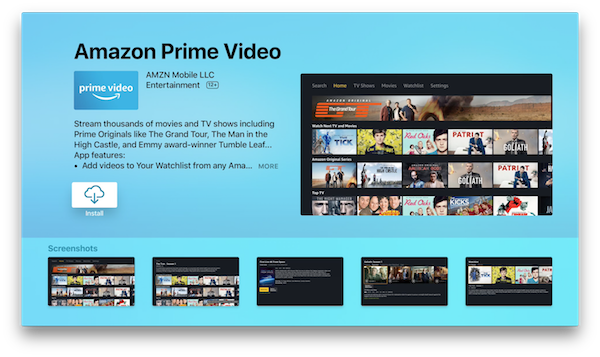 All Amazon Prime Video content will be split up into categories in the app, which is set out in typical tvOS app fashion. Users will be able to navigate the content with the Siri remote and get all associated information about a chosen video before actually diving in and streaming the content. Users will also be able to use the updated TV app on Apple TV to search for content within Amazon Prime Video and dive right into the app to consume it.

Amazon Prime Video app, for both 4th-gen and 5th-gen Apple TV hardware, can be downloaded for free from the tvOS App Store.

Update: Seems like the app is also rolling out for Apple TV 3rd-generation models!