If a new smartphone has been on your immediate wish list, but you really aren’t a heavy enough user to warrant parting with upwards of $800 for a top-of-the-range modern option, then the time has potentially arrived to reach in and grab that credit card out. Samsung’s Galaxy S range of Android-powered smartphones really don’t need any introduction, and even though we’re talking about the S5 version of the series rather than the latest S7, it’s still worth $159.99 of anyone’s money, if not as a primary phone, then certainly as a secondary phone.

Samsung may currently be pushing the Galaxy S7 and S7 Edge as the cutting-edge of smartphone form and function, but that doesn’t mean previous-generation models aren’t with their benefits. In fact, the Galaxy S5 can probably still hold its own when put up against a number of modern devices on the market today. This particular deal relates to a Samsung certified refurbished Galaxy S5, but that doesn’t change the fact that it packs a “big, bold” FHD (1920 x 1080) 5.1-inch Super AMOLED display with capacitive multi-touch capabilities and is IP67 dust and water resistance certified. 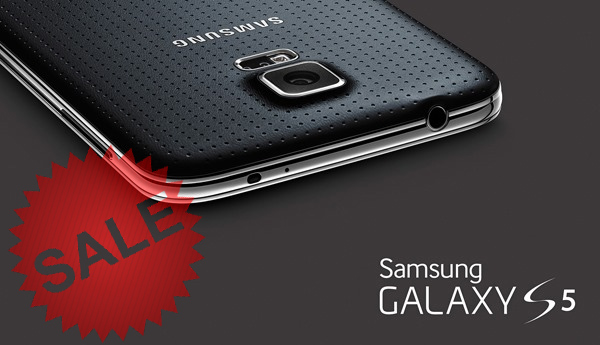 The power of this underrated hardware comes from the integrated quad-core 2.5GHz Krait 400 processor with Qualcomm MSM8974AC Snapdragon 801 chipset. There’s also an accompanying 2GB RAM that is offered alongside the 16GB of internal storage available to the user. If that isn’t enough space to store all of that lovely data, then the device is also expandable up to 128GB through the use of an external microSD card. Like most of Samsung’s Galaxy S devices, there’s also a lot to be said about the highly performant camera.

This particular model ships with a rear-facing 16-megapixel shooter that comes with automated phase detection autofocus and an LED flash to enhance those low-light images. The phone supports 4K UHD video recording, and slow motion recording in 720p@120fps. For selfies, there’s a 2MP module in place that also records videos at 1080p.

Of course, it also comes with the usual integrated sensors like a barometer, heart-rate sensor, and a fingerprint sensor for biometric authentication and approving purchases and the likes. The one downside is that little beauty doesn’t come with the latest version of Android pre-installed out-of-the-box, but rather is running Android KitKat 4.2.2. Don’t be disappointed, the phone can be updated to Android 6.0 Marshmallow over-the-air. 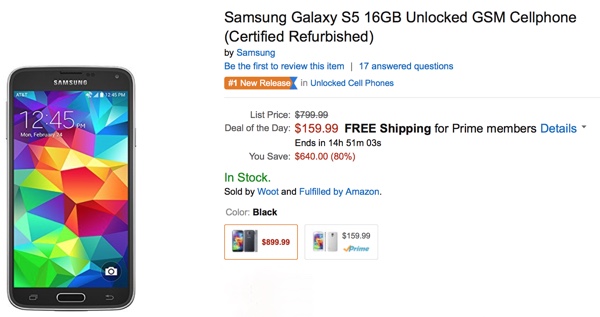 If you’re interested in achieving greatness by owning this powerful Samsung smartphone at this ridiculously low price, then you might want to hurry up and make the purchase as the deal will end in less than 24-hours and revert back to the original, higher price. The phone is available in Black, and White colors, and comes fully unlocked so that it can be used on any carrier.

Update x1: They are all sold out now. If you are still looking for a deal on Android smartphones, the good news is that Google’s latest Nexus 6P and Nexus 5X are both on sale right now for limited time: