CydiaBulletin For iPhone, iPad Will Notify You For Package Updates In Cydia

If you took a survey involving users who run jailbroken devices, I am pretty sure the majority of them would tell you one of the main reasons they jailbreak their iOS devices is due to the freedom it affords them. There is no doubt about the fact that the average jailbreaker loves Apple’s devices, after all, they wouldn’t part with their hard earned cash if they didn’t feel it was worth it. Like many other groups, the jailbreak community has its differences, but one thing that pretty much everyone agrees on is; that opening up the device for modification and enhancing can only be a good thing.

Jailbreaking breeds innovation amongst developers, but it also encourages enterprising coders to enhance the existing features of iOS and add functionality which they feel should be there out of the box. The Cydia store, which provides users with a platform to install software via APT repositories, is the main port of call for all jailbroken users. Cydia acts as a third party, unofficial application store which gives access to privately owned repositories containing apps, tweaks and tools which would not be allowed on the App Store due to guideline infringements. The existence of Cydia allows users with what seems like an unlimited choice when it comes to device customization, but there is perhaps one thing missing when compared to Apple’s official App Store.

Thanks to a recent upgrade to the App Store, the application icon is not automatically badged if an update becomes available for any installed applications. Prior to this, the user had to enter the store before they could see if any new versions of apps were ready for download. The badging of the icon now alerts users to app updates, allowing them the choice of entering the App Store immediately to download, or to leave until later.

The current behavior of Cydia, acts in a similar fashion to the old App Store. Users will currently have no idea if an update to a tweak or theme exists until they pro-actively launch Cydia and wait for any changes to refresh. A lot of tweaks have a number of releases before they work perfectly with other third party installations, so it is occasionally vital that the update is installed as soon as it becomes available to avoid the continuing of conflicts.

iOS developer Ryan Petrich has taken the initial steps to rectify this issue, by beginning work on a tweak he is calling CydiaBulletin. As you can see from the screenshot below, CydiaBulletin provides Notification Center alerts when a new version of an installed tweak is available. I can only imagine that this offers all of the functionality of other alerts, such as being available on the lock screen, an audible tone and swiping the alert to go directly into Cydia. 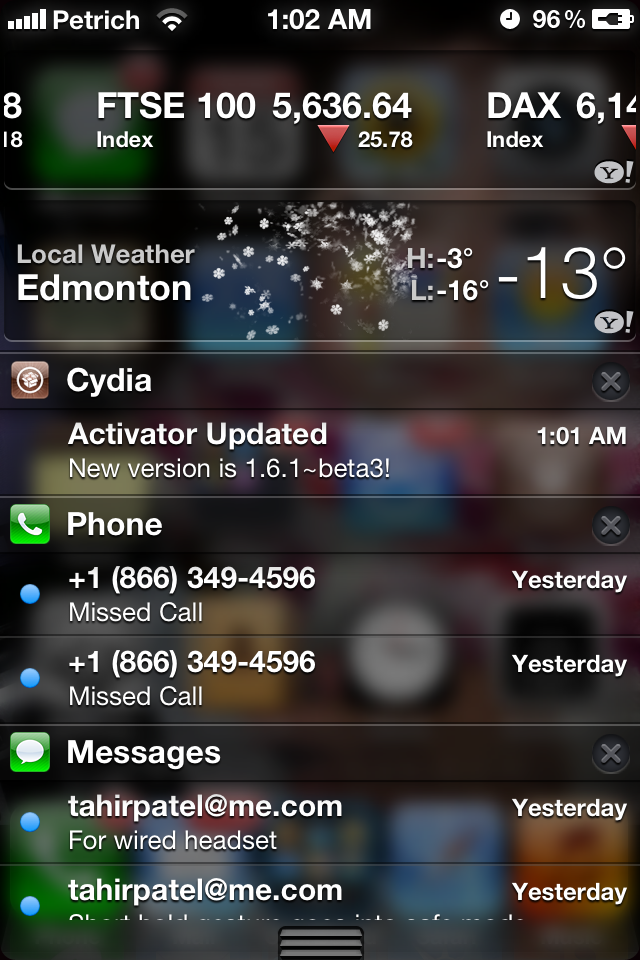 The work is obviously in the initial stages, and I must stress that no estimated time of release is even close to being set. A few questions about how the teak actually works also remain, such as, whether or not CydiaBulletin will work with all custom repositories, or just the default set that come with Cydia.

Considering it is being developer by the author Activator and RetinaPad, it is sure to be a professional, accomplished and very functional tweak when/if it is ever released to the public.

We will definitely inform you as soon as the tweak is available for download, so stay tuned.