If you think that you are the world’s number one Apple fan, then you might just want to think again after one couple celebrated their wedding by having their photos taken in Singapore’s only Apple Store.

The pair, who got married on June 3rd, celebrated in style alongside new Macs, iPhones and iPads while onlookers cheered them on. 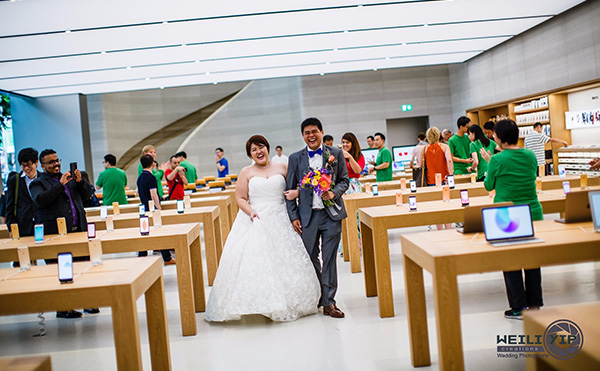 Jermyn Wee, 34, and Chia Suat Huang, 31 had been looking for a great place to have their photos taken following their marriage and while ideas such as a wet market were put forward by his new wife, Wee was apparently far from keen due to his being camera shy. This was all put right by the proposal of having the photos taken at an Apple Store, with self-proclaimed Apple fan Wee unable to refuse.

The story goes that the newlyweds arrived at the store around half an hour before it opened, with the couple’s bridesmaids and groomsmen attempting to convince the store’s management to let them in to allow the photos to be taken. “They decided to let us in 10 minutes before opening,” Chia said, and the rest is history. As you can see from the photos, the end result was pretty spectacular, complete with a walk down the “aisle” that apparently had patrons cheering the couple on. 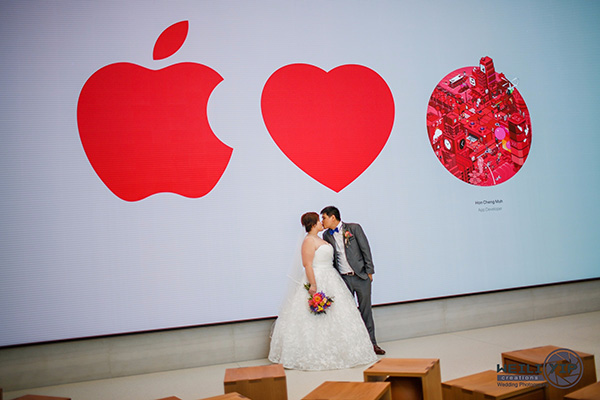 “[People] were mainly curious and we heard a few congratulations along the way,” Chia said. “They started clapping when we walked down the ‘aisle’.”

As far as things that have happened in an Apple Store go, this has to be fairly high on the list of things that we would not expect to see when popping in to pick up a new iPad, but congratulations to the newlyweds and we hope they have a long and happy life together!