We all know that smartphone batteries can catch fire or explode in rare circumstances – something the folks at Samsung found out all too readily with the Galaxy Note 7 last year.

Apple is no stranger to battery issues itself either, but a new report out of China by Taiwan News suggests that one of its iPhones exploded for a rather strange reason indeed. 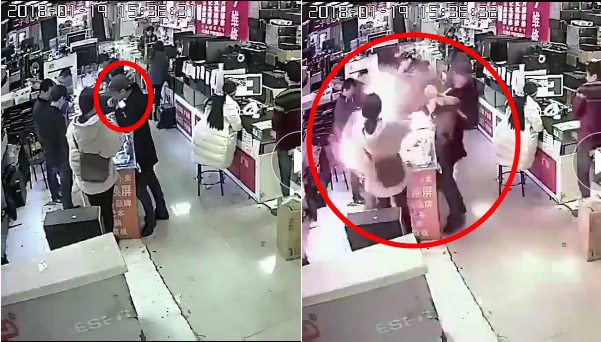 According to the report, a man went into a third-party retailer in order to have the battery on his iPhone replaced. Apparently, he had some doubts over the authenticity of the battery itself, with the only way of confirming it apparently being to bite into it. The end result? Well, let’s just say he is unlikely to go biting into batteries any time soon.

Thankfully, nobody was injured during these somewhat surreal events, although when the man bit into the battery, it did explode in what can only be described as fairly big ball of flames. Perhaps the most amazing thing about all this is that the whole episode was captured on the store’s security cameras, meaning we can witness it in full color.

We, of course, would not recommend doing this, even if you have a suspicion that the battery you are being given is not 100% genuine. If anything, if the battery is a knock-off then it’s even more likely that it will not take too kindly to being bitten, increasing the risk of an explosion. Our recommendation would be to head to an Apple Store or an Apple authorized retailer to get the battery checked out if you have any doubts at all.

Check the video out and witness just what can happen when an iPhone’s battery is maltreated; it’s quite a sight to behold!