Thanks to the release of what is being called the async_exploit by Ian Beer it’s becoming increasingly possible to do a number of things on Apple’s devices which weren’t previously possible without a full jailbreak. One of the latest processes involves being able to change the text which appears in various parts of the lock screen.

The availability of the released exploit means that developers can build new apps and experiences which allow functionality to be invoked which previously would have only been available to jailbroken device owners. 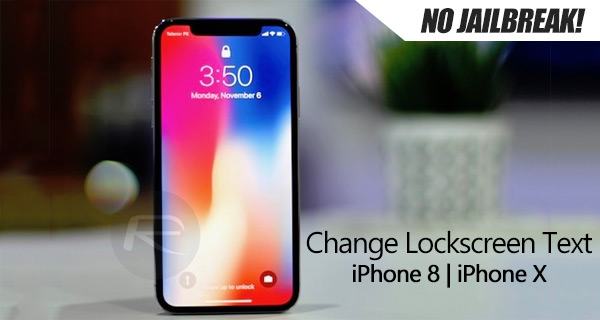 In this instance, the focus is on being able to change various strings on the device which are hardcoded into the platform, such as those found on the Lock screen when the device is locked. All you will need to be able to do that is a file explorer app built with the exploit injected, such as FilzaJailed which we recently told you about. Once you have FilzaJailed installed, you can follow the instructions below. Remember, this will only work on iOS 11.0-11.1.2 devices.

The process is relatively simple.

Of course, in these situations, the advice is always largely the same. If you don’t know what you are doing or don’t feel comfortable modifying these files and are wary of the outcome, then simply don’t do it. It’s unlikely that changing some string files will cause disastrous effects but we do need to remember that this isn’t a jailbreak luxury, and, as such, doesn’t come with the safety net of Cydia Substrate Safe Mode.