It seems that we can’t have an updated version of iOS without the issues that accompany it, and iOS 9.3 appears to be no different in that regard. With iOS 9.3 having hit iPads and iPhones around the globe just a couple of days ago, we are already hearing of plenty of update-related issues.

Primarily, the problems we have heard about are related to Apple’s iPad 2, which, admittedly, is getting a little long in the tooth. That being said, Apple still lists the 5-year-old iPad 2 as an iOS 9.3-supported device, which means it should at least install without causing too many problems. Unfortunately, that doesn’t appear to be the case. 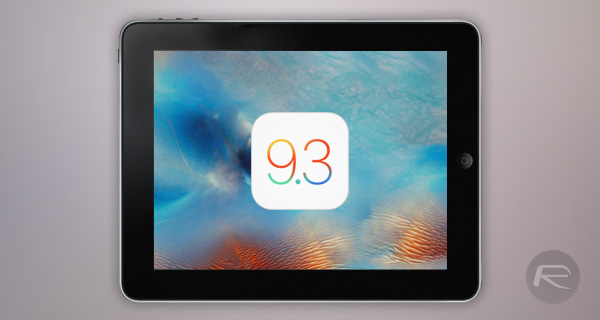 Reports are cropping up of iPads that are beginning the installation process for iOS 9.3, but then failing with an error. With iPad 2 devices complaining that they “cannot activate,” owners of the ageing tablet are left with a device that is effectively bricked. That’s never a great position to be in, that’s for sure.

Initially, the theory was that the issue was caused by Apple’s authentication servers simply being overloaded, but that should have subsided by now and unfortunately, we are still hearing of iPad 2 tablets refusing to update. If you do find yourself in the same position, or know someone who is, then you might want to try a fresh installation of iOS using the method outlined below before booking a Genius Bar appointment.

Shot of a post from the Apple Support forum,

Remember, though, the steps below will completely wipe your iPad, make sure you’re backed up!

With that out of the way, let’s force your iPad into DFU mode and then try to restore to iOS 9.3 afresh.

Step 1: Get iOS 9.3 IPSW file for your iPad from here: Download iOS 9.3 Final Version For iPhone And iPad [Direct Links].

Step 2: Next, connect the iPad to your computer and launch iTunes.

Step 3: Now hold down both the Power button and the Home button for 10 seconds.

Step 4: When the 10 seconds are over, let go of the Power button but continue to hold down the Home button until iTunes confirms that iPad is in recovery mode. That’s good news!

Step 5: Now press and hold Shift key on the keyboard if you are on Windows or Option/Alt key if on Mac, then click the Restore button in iTunes, followed by selecting the IPSW file you downloaded in step 1 above and then wait for iTunes to complete the restore process.

Hopefully, by the end of that process, you’ll have a fully working iPad running iOS 9.3.