Buy One, Get One Free On 32GB iPhone 4 At Best Buy This Weekend Only

Although this offer is only available in the United States, some readers around the world and in European countries may not be overly familiar with Best Buy. The company is a multinational retailer of technology and entertainment products with operations in the United States, Europe, Mexico, China and Canada. 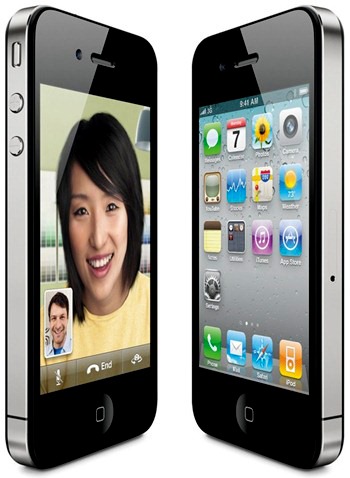 The Best Buy family of brands operates across the globe, and although some people may not be familiar with the actual Best Buy name, it is possible that one of their brands operates locally. Some of the brands which operate under the Best Buy family are Best Buy Mobile, Audio Visions, Five Star, The Carphone Warehouse and the Geek Squad. The company employs over 180,000 staff and generates over $50 billion in yearly revenue across all operations.

A week ago the company alerted customers to a special offer they were running to celebrate Christmas Eve. Giving consumers the chance to purchase the popular Apple iPhone 4 and receive a second iPhone 4 unit for free. This offer applied solely to the 32GB version of the device launched in June 2010 and required the purchaser to sign up for a two year cell phone contract with each device. 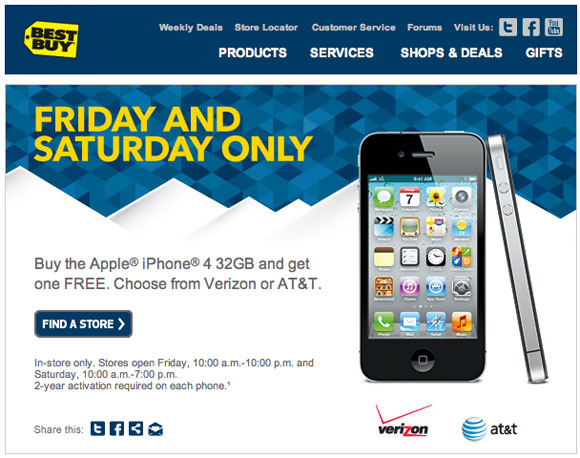 With New Years Eve approaching Best Buy have decided to share the festive spirit by offering the same deal once again to customers. The deal is turning out to be quite successful, especially as the 32GB iPhone 4 is considered to be the top of the range model and is no longer officially offered by Apple. With the iPhone 4S being launched in October of this year, the iPhone 4 is now only being manufactured in a 8GB model making it a cheaper alternative for those who don’t wish to purchase the more expensive 4S.

In spite of the fact that 32GB iPhone 4 models are no longer being manufactured, it is common knowledge that companies do hold a stock of the said devices in their inventory. Best Buy are proving very shrewd to offer such an appealing deal to customers, especially on two of the busiest shopping days during the holiday season.

The deal is officially a buy one, get one free offer on a 32GB iPhone 4. The device must be purchased at a price of $199, effectively discounting the second charge of $199 for the free handset. A 2-year activation is required for each device. If you are in the market for an iPhone for yourself and a friend or family member, but don’t wish to jump on the 4S bandwagon, this could prove to be a very good deal with a saving of $199 being offered.

The offer is available exclusively to in store purchases this Friday and Saturday only.