The world is becoming more and more of a constantly online kinda place. We love online through Twitter and Facebook, and our data is also beginning to live online, too.

With Dropbox and the like making it easy to keep our important files with us at all times, the competition to house all our data is fierce, and Box is now upping the ante with the release of an updated Android app alongside a great new offer.

To celebrate the release of the updated Box Android app, the online storage company is offering everyone who downloads the app a free 50GB of storage, up from the usual 5GB offered to everyone else. The offer runs for a limited time, so if you’ve got an Android device we strongly suggest you get the app downloaded ASAP in order to claim your free 50GB. Don’t worry, the extra space is for the life of the account, too, so Box won’t get you hooked on the extra space and then make you pay for it later.

The Android app itself sports some new features that are worth a mention, with users now able to give others access to files and folders, along with read and write privileges which will be great for collaboration. 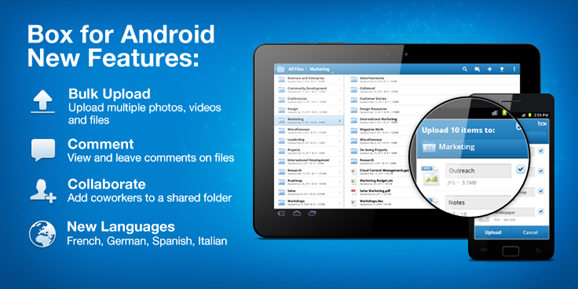 The app also allows the upload of multiple files simultaneously as well as coming packed with more language choices for those who want them.

Box is currently playing second fiddle to the biggest player in the online storage market, Dropbox, who offers a similar service but with more of a focus on syncing across multiple devices rather than a straight online storage service. The addition of a free 50GB storage option for Android users however may go some way to redressing that balance, with Dropbox currently asking for $10 a month for a comparable service.

We’re big fans of Dropbox here, but with this new offer from Box we might have to reconsider our allegiances, although we suspect the 50GB offer will extend to the iOS version of the app when that gets a similar update.

Until then, Android users have one more thing to crow about to their iPhone owning friends.

Hit the source link for all the details and get started!