The British Broadcasting Corporation (BBC) is known the world over as a public provider of broadcasting services, as well as a reputable source of twenty-four hour news through their television, web and mobile app channels. In more recent times we have seen the BBC expand their mobile offerings by pushing out a dedicated sports app to compliment their existing news app and it seems that they aren’t quite finished with their app intentions just yet after officially releasing a dedicated weather application for iOS and Android devices, available to download now.

The free-of-charge BBC Weather app can be found on Apple’s iOS App Store as well as Google’s Play Store and offers mobile users the ability to stay on top of the weather wherever they are. As we have seen with most of the BBC’s mobile releases, the new weather app is essentially a simplified and user-friendly way of accessing all of the more complex and in-depth data that has always been available online through the corporation’s website. The app does what all good mobile releases should do – makes the information simple to understand and presents it in a minimal but usable format.

The app itself is location aware, and immediately makes use of the device’s GPS when it is launched. The main interface of the software is built over the top of a full-screen weather image that seems to reflect the current conditions but does seem to have pulled more than a little of its inspiration from the extremely gorgeous Yahoo! Weather offering that dropped a few months back. The location, expected daily high and low temperatures and a nice icon representing the weather are all shown front and center to immediately catch the user’s attention. 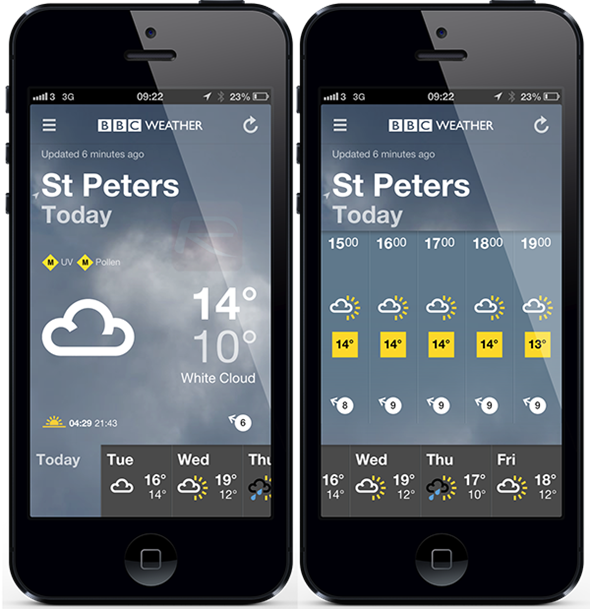 Scrolling the middle section of the interface shows a very attractive hourly forecast for the currently selected day. The bottom of the main interface features a horizontal scrolling setup that shows the weekly forecast for the detected location with a simple tap drilling down to more detailed information. The Settings section of app contains everything that we would expect from a weather based app, including the ability to change the units associated with wind speed and temperature as well as letting the user decide if they’d like to share usage statistics with the developers.