One of the most prominent developers in the modern jailbreak community has released what is essentially an alternative to the Saurik’s Cydia Impactor utility, with the difference being that it’s web/Safari-based app and doesn’t require any computer to work.

The new tool, called BaytSigner, appears to be the result of a challenge to create something that would replicate the functionality found within Cydia Impactor, but one that doesn’t restrict a user from using it on a PC or Mac as is the case with Cydia Impactor. The result is a web app which replicates that experience through the Safari browser for signing and sideloading of apps on iPhones and iPads.. 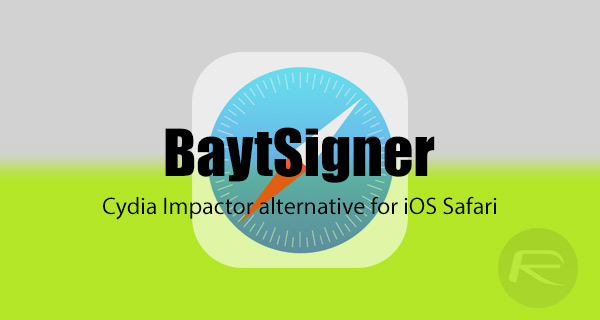 There are a few things to note here. While BaytSigner has loftier ambitions to be a full Cydia Impactor alternative in future, it’s currently limited to signing and installing Luca Todesco’s yalu102 jailbreak app only.

It is also currently in beta stage, but will hopefully be extended with more functionality in the future to allow signing and sideloading of any app. At the moment though, it is useful for those who need to re-jailbreak their device after the 7-day certificate has expired, and they aren’t, or can’t get near a computer to do it via Cydia Impactor. So if you’re out and about with an expired yalu102 certificate, you can use this to install yalu102 with a fresh certificate right on the device itself. No computer is required.

The said service can be accessed by heading over to cloud.baytapps.net/jbyalu/go via Safari on an iPhone or iPad, and then use a Apple ID, password and UDID of the device to get up and running. Just like Saurik’s Cydia Impactor, the developer behind BaytSigner claims that “your Apple ID and password will be sent to Apple’s Servers ONLY and we won’t also save your UDIDs at all because we really made it to make your life easier ( ONLY )”. We’ll still suggest creating a burner Apple ID for this which you can easily do for free at appleid.apple.com instead of using your primary Apple ID/iCloud account. It’s always better to be safe than sorry.

It’s worth mentioning here that a full auto-signing tool is currently in the works by Saurik which will remove the 7-day certificate limitation that recent semi-untethered jailbreaks like yalu102 come with. It is expected to be dropped real soon. We will of course let you know as soon as that happens.

Until then, if you are feeling adventurous, you can give BaytSigner a shot.