Now that iPhone 6s and iPhone 6s Plus are on sale, we can begin understanding how the hardware actually performs in real-world scenarios. Sure, Apple does a fairly convincing job of outlining things like expected performance, and the probable battery life that consumers can expect from the phones, but how do they actually stack up against the hardware that they are replacing? More interestingly, how does the actual battery life compare to last year’s flagships considering Apple has reduced the size of the internal power packs?

If you haven’t yet made the decision to move away from last year’s iPhone 6 or iPhone 6 Plus to this year’s iPhone 6s or iPhone 6s Plus, and part of that decision is due to the fact that Apple has reduced the battery size in the newer hardware, then this video is probably worth watching. The test shown in the video is entirely non-scientific, but is otherwise an interesting take on testing the battery, which puts all four Apple iPhones to the test. Will this year’s iPhone 6s models live up to Apple’s marketing hype of offering the same battery life compared to last year’s models? 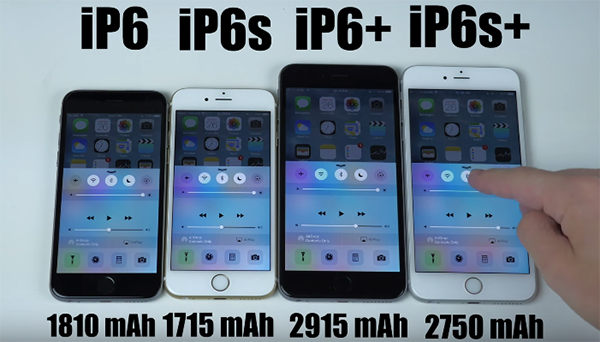 So, the situation is as follows; in order to make the playing field as even as possible, all four phones were set up as close as possible with Wi-Fi turned on, Bluetooth enabled, Do Not Disturb activated, and brightness set to the same levels across all the phones. One thing that differed is that the iPhone 6 didn’t contain a SIM card, which meant that it wasn’t polling the network for signals. Given that this could potentially skew the results, the same test was performed twice, with and without a SIM card present. The test itself involves running through two and a half episodes of the popular TV drama Better Call Saul.

As previously mentioned, the test itself can’t exactly be filed under the most scientific that we’ve seen, especially considering the video creator didn’t have enough SIM cards to make it an even experiment and needed to swap them around. With that said, the percentages speak for themselves, meaning it’s quite evident that iPhone 6s and iPhone 6s Plus owners can expect to a battery life that’s less than what has been advertised by Apple.

Check out the test for yourself, in the video below.