Countless number of clueless iPhone users have reported an increase in their data consumption ever since Apple released the iOS 9 update. The new version of iOS includes a host of new features targeted towards the power users, with Apple having enabled some features by default in pursuit of offering the best experience to its users. One of those features is the new Wi-Fi Assist feature which shifts your iOS device to the cellular data connection automatically if your Wi-Fi connection is poor, and as it turns out, this feature is likely the culprit in people reporting higher data consumption.

While Wi-Fi assist feature is useful and all, but if you are not on unlimited data plan, your cellular data usage can go through the roof if the Wi-Fi networks you frequently connect to are poor in quality. Luckily, there’s a quick and easy way of disabling this default behavior in iOS 9.

Step 2: Head over Cellular and scroll down till you find Wi-Fi Assist. (For those outside U.S., Cellular will be labeled as Mobile Data.)

Step 3: Simply tap the Wi-Fi Assist toggle to disable it. 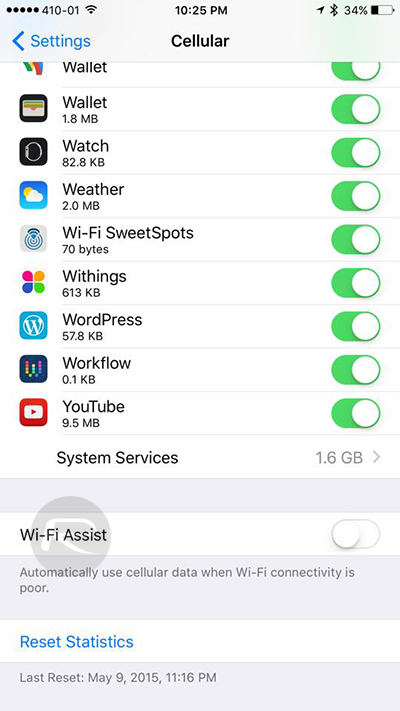 Go ahead and exit the Settings app now. That’s it, iOS will no longer automatically switch to your cellular data if the Wi-Fi connection is poor.

If you haven’t seen a visible increase in your data consumption after updating to iOS 9, you might want to keep an eye on it. There have been instances where some users have reported that their data consumption increased by almost seven times, which is a staggering figure.

As mentioned earlier, Wi-Fi Assist is without a doubt a feature that can prove to be very handy, but it is entirely down to a user’s choice of data plan. For those with a relatively lower data limit, it is likely that the feature could be detrimental to your plan, especially if your Wi-Fi network is usually poor. That said, those with unlimited data plans would find this feature to offer a truly smooth Internet experience as the iOS device switches back and forth between Wi-Fi and data depending on the quality of the Wi-Fi connection, all automatically.