Ever since the inception of Mobile Safari in 2007, back in the original version of iOS, the said browser has always had Back and Forward buttons, making navigation function identical to the way it would work on traditional Windows, Mac and Linux web browsers. Yet, several versions of iOS’ later, it’s still not possible to move back or forward more than one page at a time, unless you’re jailbroken. 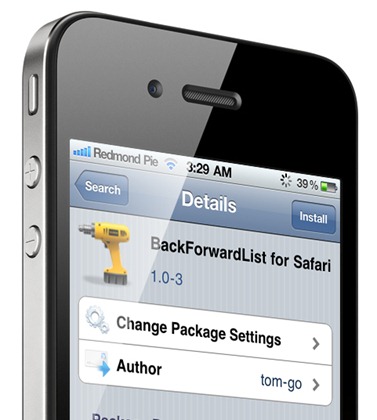 Most desktop web browsers allow for some flexibility in their back/forward feature, making it easier to navigate to addresses browsed recently but not immediately before the current page, as you can see in the image below.

Bringing this feature to iOS devices only sounds logical and certainly productive. It increases productivity as well as saves bandwidth costs since it requires fewer unneeded content to be downloaded, which is just great news to those on cheaper or severely capped data plans. Thankfully, this feature can be added right into Mobile Safari using a jailbreak tweak known as BackForwardList for Safari.

In order to install this tweak, you first must jailbreak your iPhone, iPod touch or iPad. You can follow our step by step guide posted here to jailbreak your iPhone, iPad or iPod touch on iOS 4.3.5 using Redsn0w (or PwnageTool), or on iOS 4.3.3 using Redsn0w, PwnageTool, Sn0wbreeze & JailbreakMe (that last one being the easiest). Before proceeding, you’re advised to be familiar with basic diagnostic tasks in iOS devices, such as entering DFU mode and performing a restore through in case something goes wrong.

BackForwardList for Safari is available from Cydia, on the BigBoss repository which should be added by default. Simply search for BackForwardList for Safari, tap on the first result and download it. If you’re looking into a great way to speed up your browsing experience, this tweak should definitely be part of your arsenal. And for a price of absolutely free, it’s a must have!