Microsoft has had a pretty good week with all said and done. The Microsoft Surface, although managing to yield its fair share of critics, was relatively well-received by those in the tech world, and the grand unveiling of Windows Phone 8 suggests the Redmond-residing company is heading in the right direction.

The platform has mainly been carried by Nokia’s Lumia series, and while the devices – particularly the Lumia 900 – have garnered quite a few advocates (notably Apple co-founder Steve Wozniak), they have, from a hardware point of view, looked comparatively weak up against the iPhone and the high-end Android offerings.

As well as support for much more capable devices moving forward, there’s plenty of exciting software in the offing with Windows Phone 8, and having demonstrated what Audible – the software maker’s audiobook app – is capable of at Microsoft’s "sneak peek" conference, it is now available to download over at the Windows Phone Marketplace.

Although software has been scarce in terms of sheer numbers for the Windows Phone ecosystem, there’s no denying their finesse, and the way in which an app is presented or behaves on WP is drastically similar to iOS and Android, which seems comparatively one-dimensional. Audible is no exception, and far from simply being a hub for downloading and listening to Stephen King or Dan Brown, it takes things up a few notches with some great features, which enhance the experience both visually and functionally. 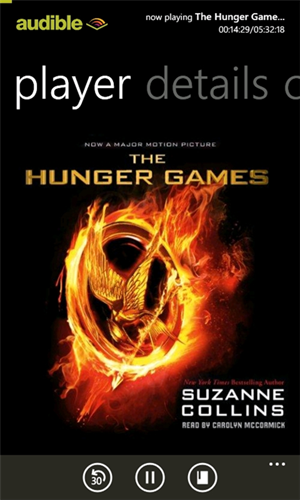 It uses those bold, vivid and striking colors we’ve come to see from most Metrofied apps, and although perhaps not necessary for those simply interested in the content of the book, there is a quirky, Foursquare-like badges section, enabling you to take audiobook experience as seriously as you would take your Xbox GamerScore. 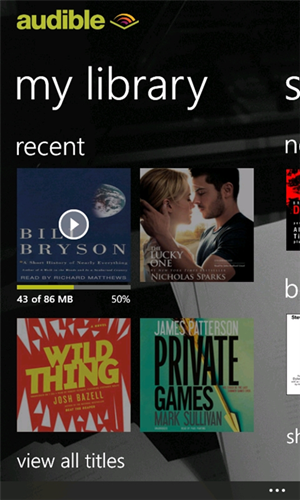 As well as eventually responding to voice commands with Windows Phone 8, it also includes a nifty "button free mode," which allows you to navigate, pause and play your audiobook without the need to actually look at the screen – ideal if you like to listen when falling asleep.

It’s based on Amazon’s audiobook services, meaning once you download the app, you’ve immediate access to an impressive 100,000-strong catalog. The news section keeps you updated on what’s new and noteworthy in the Amazon shop, as well as any important info regarding the app itself. 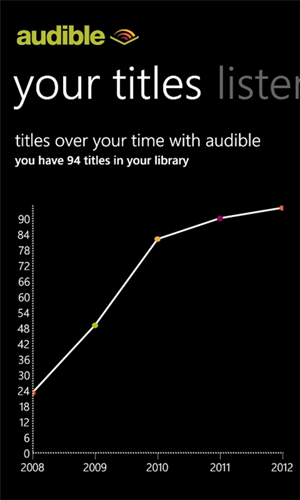 Audible is just a taster of things to come from Windows Phone 8, and although it’s not indeed a killer app by any stretch of the imagination, it is worth checking out if you’re currently running Windows Phone 7.