As the tech world continues to natter about the Microsoft Surface, which was announced earlier this week, the Redmond company has finally revealed the details of Windows Phone 8, and they are pretty impressive to say the least.

Hitherto, it’s been a two horse race between Google’s Android and Apple’s iOS ecosystem in the battle for smartphone supremacy, but much in the way the gauntlet was thrown down with Microsoft Surface, Steve Ballmer’s company will be mounting a serious challenge to the domination of the big two.

Windows Phone 7, which has won its fair share of evangelists, has always seemed a tad restricted, but Windows Phone 8 will allow devices to be unleashed as it were, allowing devices to challenge the powerful devices on offer for the aforementioned market-leaders.

There will be support for dual-core devices, and although the chief of Nokia – a company riding on the success of Windows Phone 8 – has said any more than single-core is a gross waste of power, it will certainly come as a relief to those in favor of Windows Phone in terms of software, but put-off by the slow, entry-level hardware specs.

In addition, there will be support for a variety of resolutions, including 720p and WXGA, and included in the ethos of ditching old hardware, will be a lack of support for the microSD, which will surely disappoint those looking to add extra real-estate in terms of storage.

There will also be NFC support, which brings us nicely onto one of the emphasized software implementations Windows Phone 8 will bring. The digitalization of the wallet is a trend sought by all three of the major mobile operating systems, and Microsoft has promised its own version will be "the most complete" of the bunch, and we agree to them.

Continuing with the theme of software, the Windows 8 version of Internet Explorer 10 will be ported directly into Windows Phone 8, while native code support will provide fertile ground for the "killer games" Microsoft has promised will be releasing towards the end of the year. It also means that the Windows 8 experience can easily be ported through to mobile, and given the lack of games on offer compared with Android and iOS, this will provide Windows Phone 8 with the perfect opportunity to make up some ground.

It will include Nokia mapping technology built in, as we previously revealed, and the software will – like iOS 6 at least – provide offline maps and turn-by-turn directions around much of the globe.

Conversely to Windows Phone 7.x, it will be highly customizable, allowing consumers to tweak every last feature down to the size of the tiles – which will, of course, be the live tiles we’ve grown to know and love. To say the least, the Start screen is so customizable, it is bound to make your device, yours. You can now also set the tile size to suit your needs, and the best part; no matter what the size of the tile is, it remains a live tile. 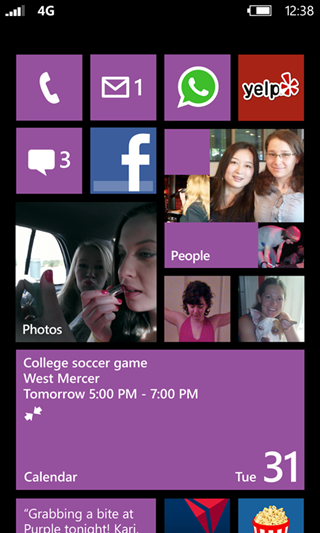 For those security conscious, there will be encryption and secure boot, and Windows Phone 8 will ship with BitLocker technology built-in. Despite much positive coverage of Windows Phone 8 in general thus far, it could be made or broken by security, so it is crucially important Microsoft doesn’t put its users at risk if it’s to test the resolve of both Android and iOS.

Last but not the least, Windows Phone 8 will have native Skype integration. This is something which a lot of people have been asking for a while, and we believe that Microsoft has nailed it spot on!

Unlike the Surface announcement, which Microsoft rather disappointingly neglected to give an ETA to, the software maker has confirmed it will arrive this Fall. Microsoft hasn’t let out any word regarding the upgrade path, but older devices will see some of Windows Phone 8 features in the form of a small update dubbed as Windows Phone 7.8.