With Apple’s 2012 Worldwide Developers Conference all done and dusted for this year, the residents of San Francisco could be forgiven for thinking they could get back to a little bit of normality without a plethora of developers and programmers buzzing around. Unfortunately for them, they may need to wait a little longer as iOS and Mac OS X developers have left, the Google I/O conference is about to descend on the Moscone Center in seven days time.

The I/O conference, held by Google annually, is all about covering the world’s latest web, mobile and social technology breakthroughs and fusing the developers together who are planning on working with those breakthroughs. Consisting of technical sessions, coding labs, keynote speeches and a good old fashioned hackathon, the I/O three day conference consistently proves to be extremely popular amongst the development community, and this year, Google are offering an official Android app for delegates to keep track of the event and their schedules.

The app itself is designed by Google to be used as a companion for the conference and is compatible with Android 2.2 and up across a massive range of smartphones and tablet devices running the operating system. The official I/O app has a lot of great features, but one of the great things for a lot of people is that Google will actually be releasing the source code to the app for developers to download and take a lot at how it was thrown together. For those who are planning on attending this year’s conference in California, the Android app will offer a fairly comprehensive array of features, including information relating to the conference schedule and allowing attendees to plan and manage their own personal schedule. 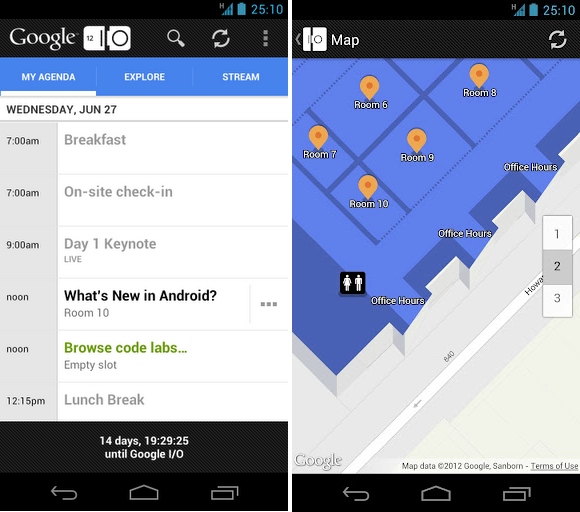 Intricate information relating to the code sessions, the content within and the individuals running the labs are also available through the app. No official Google app would be complete without the ability to +1 sessions directly from within the software, linking to your own Google+ account and profile. Probably one of the best features and certainly the most visually appealing one is the inclusion of the conference map, allowing those who are attending to never get lost.

Certain versions of the Android operating system also have the ability to give users access to different functionality within the app. An example of this is the option for Android 4.0 users to take advantage of Android Beam to send session information to other devices as well as Android 3.0 users being able to place information on the desktop using widgets and stream sessions from the app. If you are planning on heading to San Francisco for Google I/O, the free of charge official application is a must have. 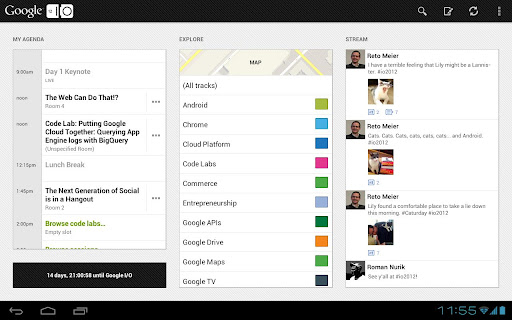