In what can only be described as a highly comical turn of events, Apple’s much lauded Siri has offered Nokia something of a shot in the arm by decreeing its latest Windows Phone 7 smartphone to be the best available.

Nokia’s Lumia line of smartphones have been seen in the industry as the Finnish firm’s last chance at international redemption, but the resurgence has suffered from one or two misfires already. But fear not, Mr Nokia Fan, for it seems that the Lumia 900 has a fan. A fan that most of us may not have expected.

If you are reading this then the chances are fairly good that you are familiar with Apple’s Siri. Siri is the digital assistant that gives the iPhone 4S a leg up on most of its smartphone competition. But even Siri seems to believe that Apple’s handsets are not the best phones around. 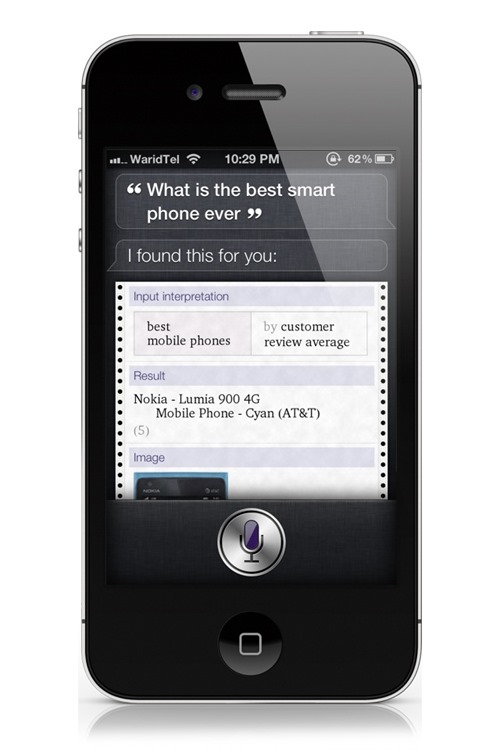 Nokia’s Lumia 900 is the company’s big push in the United States, which means it is the handset that is getting all the attention and user reviews right now which could go some way to explaining the rather odd result. While it obviously doesn’t mean a great deal, the screenshot that resulted will provide plenty of humor across the web, but the end result doesn’t change. Nokia is still in trouble.

This is not the first time Apple’s Siri has come up with some odd replies to simple questions. Since its release late last year, Siri has been entertaining in various humorous ways. We’ve had comical ads based on Siri’s ability to offer help and suggestions as well as people’s attempts to make the digital assistant sing. While neither will have been on the minds of Apple’s engineers when Siri was in development, we are sure that Siri is used more for such funny outcomes than for anything else.

In fact, we can’t remember the last time we used Siri…