A combination of great camera hardware and the rise of Instagram has given developers behind image and photo-centric apps something to shout about, but having said that, the app still has to deliver the goods and offer a substantial array of features to have any lasting effect on consumers.

Here at Redmond Pie, we’ve seen many apps come and go, and while some offer a unique feature or quirk, most have unfortunately turned out to be somewhat run-of-the-mill. Photo Studio by KVADGroup tries to break the mold somewhat, and since its Play Store résumé suggested agreeable credentials, we felt compelled to give it a try.

Upon installation, you’re met with a nice, clean UI, which is always a good start. The format is simple – you load photos from your album or straight from the camera, and add effects – but instead of just offering a few basic filters, Photo Studio goes the whole hog. You can also, of course, alter the brightness and contrast, and annotating your image or sketching something on it is very easy to do.

The developers claim Photo Studio is "utilized by both amateur and professional photographers" alike, and while pro photographers do often have their reservations about mobile photo apps (ala Instagram) Photo Studio is a solid, feature-rich experience for those looking to alter and tweak photos packed into a visually-pleasing user interface. 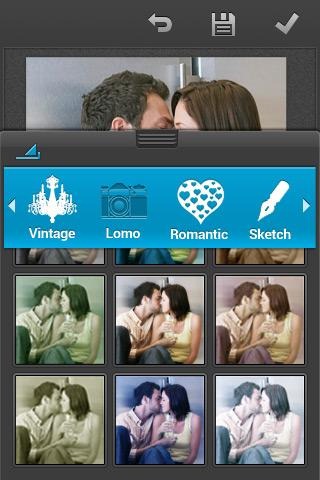 It does have a few issues, but it seems as though the developer is currently seeking to amend them in a later revision. At this point, images can only be saved in "small" and "normal," and the latter still down scales the quality of your image. "Large" and "original" should be on their way fairly soon, which is just as well, since you cannot market an app as professional while not even allowing the end product to be stored at peak quality.

Nonetheless, we must point out that it’s still in Beta, so things can only get better. In it’s current state, it still justifies a download – especially since it’s absolutely free of charge.