Apple has reached yet another milestone in its meteoric rise to mobile phone and application daddy, with the number of apps accepted into its App Store reaching the half million number.

In just 34 months since the App Store opened its digital doors, Apple has (unofficially) accepted over 500,000 apps, an absolutely humongous number no matter which way you slice it.

The milestone was reached early on Tuesday morning, writes CNN Money with Apple pushing the apps that took its store over the finishing line. Consisting iPhone, iPad and iPod touch applications, the store actually currently has around 400K, thanks to the removal of some apps due to a variety of reasons such as removal by the developer or in some cases, removal by Apple.

Apple first brought the App Store model to market with its iPhone nearly 3 years ago with many skeptical about the potential impact. At the time, the Cupertino outfit had been pushing web apps as the future of mobile applications with Steve Jobs bullish on the power of the web and iOS’s Mobile Safari Browser. Now, with over 10 billion apps downloaded, the App Store is the most popular source of mobile software on any platform, thanks to an active developer community and the millions of iOS devices floating around.

The App Store was taken to a whole new level with the release of Apple’s iPad. Bringing the App Store to even more people than were already hooked on its ease of use (read that as ‘ease of purchase’) the iPad brought the power of iOS to the world of larger screened devices giving developers more real estate in which to work their UI magic.

In order to celebrate the half million app acceptance, three companies have put together one giant infographic. Game developer Chillingo, web site 148apps and search company Chomp’s full image can be found on Facebook with a selection of captures below. 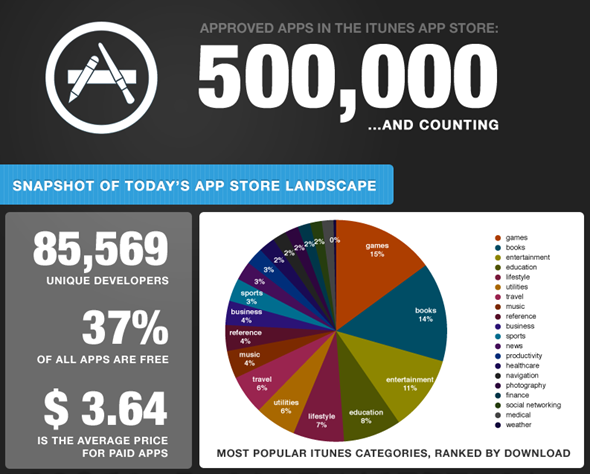