The battery life on the Apple Watch is pretty decent as it is, lasting easily for a day or even two, but that has not stopped third-party portable charging contraptions from arriving onto the scene. One such idea was the Reserve Strap which aims to charge the Apple Watch while you wear it, but unlike the inductive charging using the wearable’s own charger, Reserve Strap had planned on using the device’s 6-pin diagnostic port to get things going. Well, the contraption is now a reality and a proof-of-concept video has already been released as well.

Apple’s inductive charging method is not the fastest, and tapping into the 6-pin diagnostic port for charging purposes is something unheard of till now. The question is: why charge using the diagnostic port? According to the team behind Reserve Strap, charging the Apple Watch through that 6-pin port is actually much faster than Apple’s own inductive method. Needless to say there’s no documentation or even a hint of the port’s support for charging by Apple, raising some obvious questions as to the effects this could have on your Apple Watch as a whole, or battery health in particular. There seem to be definite concerns that removing the protective layer on the 6-pin port could be detrimental to the smartwatch’s water resistance. 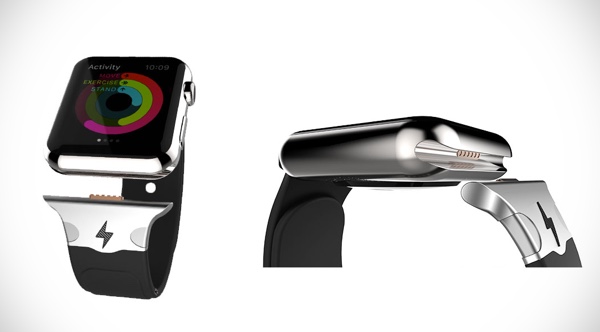 The video in question however only gives us a proof of concept that the whole thing actually works, where the team is shown charging the wearable using a wire, but of course, the design of the product will definitely change when the final iteration becomes available. With Apple designing the port to be non-serviceable by Watch users, there’s this chance that the iPhone maker could cut support for charging via that port through future updates as well.

Reserve Strap is available for pre-ordering right now for $249.99, and if you really believe you need those extra hours of battery life while potentially risking the Watch’s battery health, then head over to the Reserve Strap’s website to place your order – reservestrap.com.

Meanwhile, check out the video below to see the new charging method in action.