That’s it, folks. Apple has flipped the switch on signing window of iOS 8.4, which means you can no longer downgrade iOS 8.4.1 to iOS 8.4 or any other firmware version.

Apple released iOS 8.4.1 last week which not only patched exploits used by TaiG iOS 8.4-8.1.3 jailbreak tool, but 40 other security bugs as well that could have been used in a future jailbreak tool for iOS. 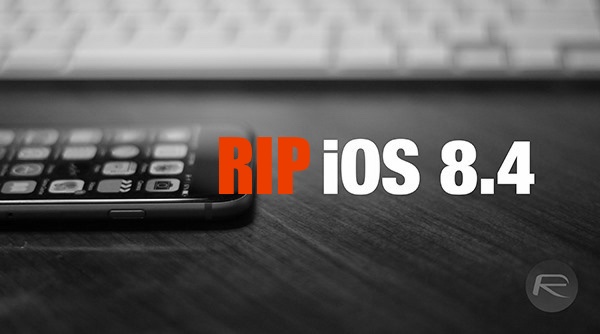 So what does this mean for jailbreakers? Well, if you’re on iOS 8.4 and care about keeping your jailbreak, DO NOT update to iOS 8.4.1 as there’s currently no public jailbreak available for this latest firmware version. With signing window for iOS 8.4, the last jailbreakable firmware version, now being closed, you can also no longer restore or downgrade to it.

As for any future jailbreak for iOS 8.4.1, while Pangu has demonstrated that they possess new jailbreak exploits which are capable of jailbreaking iOS 8.4.1, they will likely not make them public now for a minor update like iOS 8.4.1, especially with iOS 9 just around the corner. We’ll obviously keep you updated with any further progress on this, so stay tuned to us for more development on this.

Apple is expected to release iOS 9 alongside iPhone 6s and iPhone 6s Plus next month in September, followed by new iPads with iOS 9.1 in October. If there’s ever going to be another public jailbreak for iOS, it won’t be released before iOS 9 is made public.

Just stay away from iOS 8.4.1 as far as possible. You’ve been warned.