Although with iOS 8.1.3, Apple’s software team halted the joyride that has seen a jailbreak perpetually available since the launch of iOS 8, quick-thinking hackers found a tenacious workaround in the form of iOS 8.2 betas 1 and 2. While the exploits that made a jailbreak possible were plugged in iOS 8.2 beta 3 and up, those first two pre-release builds were left unchecked, and since, many eager to use Cydia have jumped on this opportunity. Now, somewhat predictably, Apple has thrown a spanner in the works.

As per an announcement by the folks at TaiG, Apple has ceased to sign iOS 8.2 beta 1 and beta 2, meaning that if you’re not running either of the specified betas or a pre-iOS 8.1.3 public release, then you’re not going to be able to reap the benefits of a jailbreak for the time being. 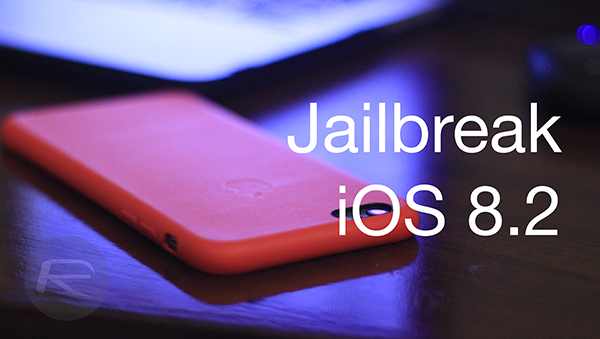 It’s a bit of a downer, but with three teams of hackers having released successful jailbreak tools since the launch of iOS 8, it’s not all doom and gloom. Bear in mind also, that aside from Pangu, which offered assistance to iOS 7 jailbreakers, we’re dealing with relatively new hacking teams here, and allied to the older and more experienced groups like Evad3rs, we can still remain optimistic for the hopes of a jailbreak on iOS 8.2, iOS 8.3 and beyond.

If you happen to be running iOS 8.1.2 or below, you can still jailbreak, and similarly, if you have one of those initial iOS 8.2 betas running, then you can still get your fill by using the TaiG tool. However, it’s important to remember that once you’re on iOS 8.1.3, you’re now completely stuck as far as jailbreak is concerned, so unless you wish to revert to stock, don’t proceed any updating for the time being. 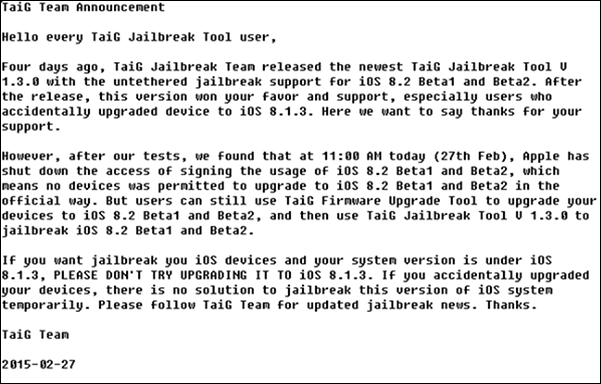 Since there was no expiry on iOS 8.2 betas 1 and 2, it was naively hoped that we had a jailbreak that would always be available. Apple had other ideas, of course, and so if you are partial to a tweak or two, do not update your device at all, since the only builds being signed are not jailbreakable.

We’ll keep you guys updated on any further info pertaining to jailbreaks, so stay tuned to our coverage here!