Anyone on the lookout for a cheap Apple Watch Series 3 in the United States right now is in luck after Apple added LTE models of the wearable to its refurbished store for the first time over the past two days.

Those looking to make a cut-price purchase originally had ten versions of the LTE flavor Apple Watch to choose from, although stock levels are not what they were a couple of days ago.

While the store has already run out of stock, we would strongly expect additional models and certainly more volume to be added in due course, as more and more Apple Watch Series 3 wearables with LTE capability start to filter through the refurbishment process.

Based on the models that have been available thus far, buyers can expect to pay between $359 and $549 for their new watch, providing savings of up to 16% when compared to purchasing brand new.

If you do decide to opt for a refurbished Apple Watch rather than a brand new and sealed one then you can rest assured that Apple has made sure the device is ready to go. The company says that all of its refurbished Apple Watch wearables are inspected, cleaned, tested and then repackaged with all the manuals and accessories that a new watch would ship with.

I’ve personally been a big fan of buying refurbished Macs, iPhones, and iPads over the years and the Apple Watch is certainly no different in my eyes. Each one ships with a standard Apple one-year warranty and this can be extended using AppleCare+, just like any other Apple Watch device. 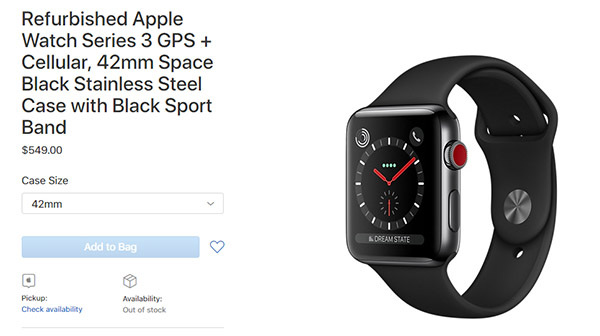 If you’re looking for something a little more powerful, how about an iMac Pro? Apple recently added its new high-end desktop machine to its refurbished store, too.