Siri may have become something of a modern cult figure since its introduction alongside the iPhone 4s back in 2011, but with the big announcement of Windows Phone 8.1 last week, Microsoft also took the wraps off Cortana, its very own Siri alternative. Given the very nature of the mobile market, we know that competition will be fierce, and as per a very funny, mocked-up parade of the respective voice assistants on an American chat show, the blue touchpaper has already been well and truly lit.

Placed alongside each other on the late-night Arsenio Hall Show, it isn’t long before the gloves come off and both Siri and Cortana begin trading insults. Siri, feeling threatened, dismisses Cortana as a “wannabe,” but Cortana snaps back with some sharp responses of her own, with a quip about Apple’s famously insufficient Maps app being among the highlights. 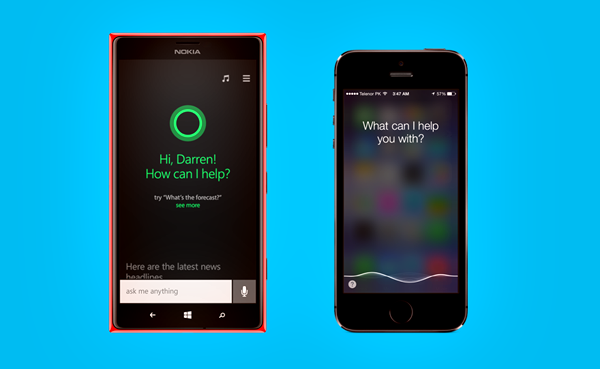 The whole sketch gets really feisty towards the end, with neither party seemingly able to let the argument lie. It gets so heated, in fact, that Siri even pulls out a knife, to which Cortana, naturally, retaliates with a handgun.

Microsoft has been rather slow in getting its act together as far as the mobile industry is concerned, and given that Siri will be three years old in a few months’ time, it’s no wonder Cortana is already having to deal with the “wannabe” slurs. In the run-up to the Windows Phone 8.1 announcement, we heard that Cortana would be among the central features, taking some of the best aspects of both Siri and Google now and combining them into an accomplished, all-round assistant.

Whether this will indeed be the case, or whether it’s mere bluster, remains to be seen. The Redmond company has been promising great things of Cortana, but has, hitherto, shown very little to suggest that it will be able to compete with the established services of rivals. The Windows Phone ecosystem is lacking a great deal when compared to iOS and Android, and so while Siri might have taken a year two to get up to a level at which it could be deemed useful in everyday situations, Microsoft knows it can ill afford such a lengthy grace period.

Anyway, you can check out the very funny sketch from the Arsenio Hall Show, which we’ve embedded below. Please bear in mind, though, that since it is a late-night chat show, that there is quite a bit of NSFW language in there.