Apple SIM Now Supported In More Than 140 Countries Via GigSky

Apple’s international wireless carrier and mobile technology partner GigSky has officially announced that its cellular data plans aimed at iPad owners are now available in over 140 countries around the world.

The mobile data plans, which are offered via the Apple SIM, are aimed at travelers who own an iPad Pro, iPad Air 2, or a second or third-generation iPad mini, and were previously only available in 90 countries and territories at this time last year. In addition to Apple SIM, the service is also offered via a standalone GigSky SIM and app which can be used with just about any cellular device.

As part of an effort to seamlessly support travelers moving across different locations, GigSky has announced support for “all top travel destinations”, as well as additional countries like Ecuador, Argentina, Jamaica, Isle of Man, The Virgin Islands, St. Vincent and the Grenadines, Colombia, the Cayman Islands and many more.

The recent launch of the 9.7-inch iPad Pro, which ships with an embedded Apple SIM, has raised expectation levels, causing more and more iPad owners to want to take advantage of the short-term data plans offered by GigSky directly on iPad.

The new iPad Pro is the greatest travel companion ever. We’re thrilled to be adding more countries, more LTE coverage, and more data at the same price. Our expanded coverage means travelers can use GigSky service on iPad most anywhere this summer to get online and connect, like they do at home, to everything that’s important to them – work, family, friends, social media, or their favorite travel apps. 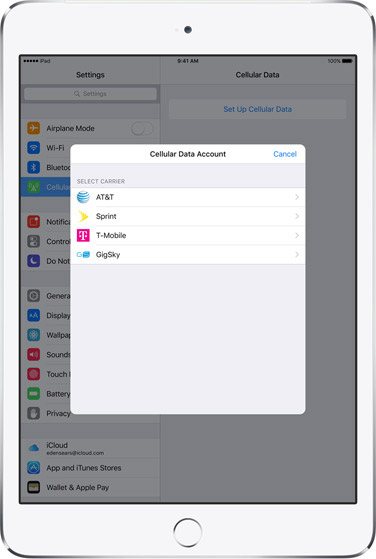 The Apple SIM can realistically be used for any data requirements that a user may have on the iPad, but is particularly useful for those who travel quite frequently and need a short-term, pre-paid amount of cellular data prior, or even during, the event – without having to buy any other SIM locally. GigSky CEO Ravi Rishy-Maharaj believes that the Apple SIM experience in collaboration with his company couldn’t be any easier:

Customers select the data they need, for just the time they need it. No extra fees or taxes, and no contracts. GigSky is for travelers who want the control to connect anytime, anywhere at a reasonable price.

Complete updated list of Apple SIM supported regions can be seen in the image embedded below.