Rich Communication Services, or RCS for short, has been bandied around for a while now. With involvement from mobile carriers, Microsoft and Google, RCS has been put forward as a replacement for SMS.

Now, a surfaced slide from a GSMA event is suggesting that Apple Inc. is also playing a part in the progression and ultimate adoption of the technology.

The GSM Association (GSMA) is a trade body that has been created to represent the interests of mobile carriers on a global scale. The Association boasts an impressive 800 mobile operators as full GSMA members and an additional 300 as associate members. Of course, if rolled out, this new Rich Communication Service technology would likely affect all of those full and associate members. The leaked slide from the October GSM Association event suggests that Apple has inquired about the integration of RCS in its iOS platform.

The slide is extremely vague and says that Apple has “engaged in discussions with the GSMA and Operators about including RCS in iOS,” which could literally mean that Apple and the GSM Association have had a telephone call on the topic. However, it could also mean that Apple is looking to actively work with the GSMA and its partner organizations to try and push RCS technology forward for the betterment of all. Additionally, the slide suggests that RCS would enhance the iOS experience for the following reasons: 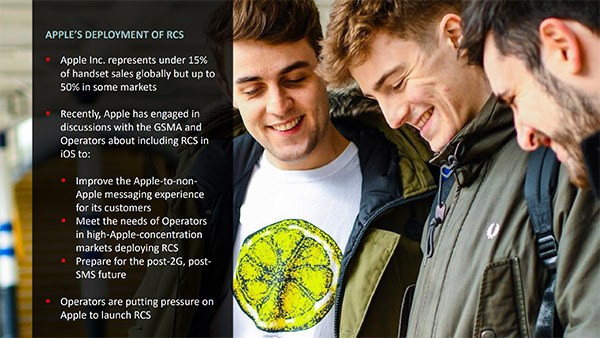 That initial bullet point is very important. Currently, iPhone-to-iPhone communication is very elegant thanks to Apple’s iMessage protocols. For those without iPhones or the Apple-to-non-Apple comms, things aren’t as smooth and reliable. When the green bubble appears, there is generally a sigh of frustration. Apple seems hopeful that adoption of RCS within iOS would resolve that. Or, at a minimum, make the experience a lot better.

An interesting statistic on the slide shows that sales of iPhone represent under 15% of smartphone sales globally but that Apple’s iPhone accounts for up to 50% of sales in some markets. If any additional information relating to Apple and its adoption of RCS becomes clear, we will be sure to let you know.