When Apple announced iOS 13 and iPadOS 13 during WWDC last month, it said that we could expect new support for radio stations as part of those updates. When the updates ship later this year, iPhones, iPads, and HomePods will support Siri requests to play radio stations and it appears some of that support is already here.

Apple said that the new radio functionality would use iHeartRadio, Radio.com, and TuneIn as sources, allowing users to enjoy more than 100,000 different stations. According to multiple reports, some of those stations are already working just fine.

Form our own testing, it seems that iOS 13 iPhones are indeed able to play select radio stations when prompted via Siri. The same goes for HomePods, too, even though they are running iOS 12.4. Things aren’t quite as fluid as they could be and it’s clear things aren’t fully baked yet, but things are definitely going in the right direction.

Currently, a request of “Hey Siri, play radio station x” is required to make things work. Hopefully, that will be tidied up in due course, however.

During our testing, the audio quality has been as good as is to be expected, with the HomePod in particular sounding very good indeed. Unless you’re an audiophile, we expect you to be very happy with your radio listening experience once these updates land later this year. 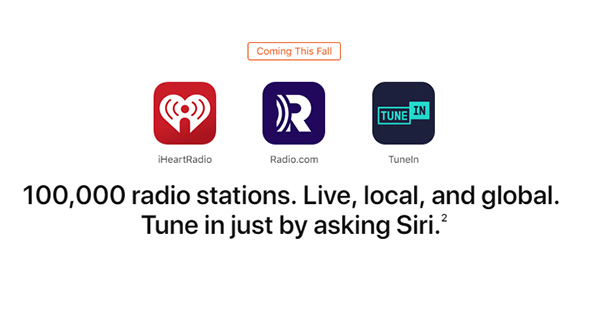