WWDC’s opening keynote is over, and a raft of new releases in both the software and hardware fields have been announced, including a whole new wireless Magic Keyboard, but this one is a little bit different.

Apple’s wireless Magic Keyboards are great for those who want to have a minimalist, clean desktop experience without going third-party for a solution from the likes of Logitech, but there has historically been something missing from them. They’re small, they’re light, but that comes at the expense of something most people won’t miss, but some people will be unable to cope without – the numeric keypad. 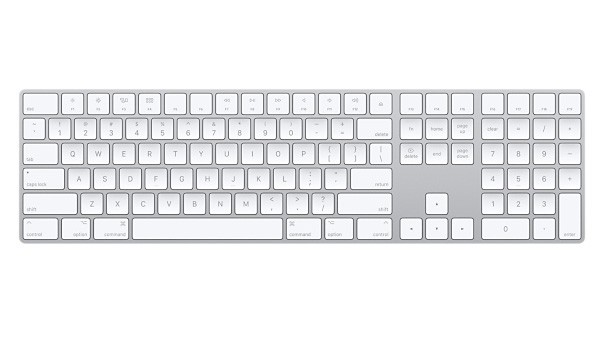 Apple today righted that wrong by releasing the new Magic Keyboard with Numeric keypad for $129. As a result of the new keyboard’s release, Apple has also killed off the wired version that was previously the only Apple keyboard available with that additional collection of number and ancillary keys. Those keys include document navigation controls and full-size arrow keys for gaming. Given some of the new, powerful iMac hardware announced those game-friendly keys could come in useful.

Just as the standard Magic Keyboard does, the new offering features a Lightning port for charging and a built-in battery that will apparently last a month without being connected to power and Apple says that the keyboard will work with any Bluetooth-enabled Mac running macOS 10.12.4 or later, or any iOS device with iOS 10.3 or later installed.

Those looking to buy in the United States can order today for delivery as soon as June 8th, although pricing and international availability does differ depending on the country you are shopping in. Given the fluctuating exchange rate, particularly in the UK, that local pricing may unfortunately not be particularly favorable at all. To place your order right now, head on over to Apple’s online store at apple.com.