Apple is now the world’s largest smartphone maker for the fourth quarter of 2020, overtaking Samsung in the process. This is the first time that Apple has found itself at the top of the list since 2016 according to data provided by Gartner.

According to that data Apple sold around 80 million iPhones in the fourth quarter.

That 5G addition, alongside improved cameras, brought the sales needed to top the list according to Anshul Gupta, Senior Research Director at Gartner.

Even as consumers remained cautious in their spending and held off on some discretionary purchases, 5G smartphones and pro-camera features encouraged some end users to purchase new smartphones or upgrade their current smartphones in the quarter. 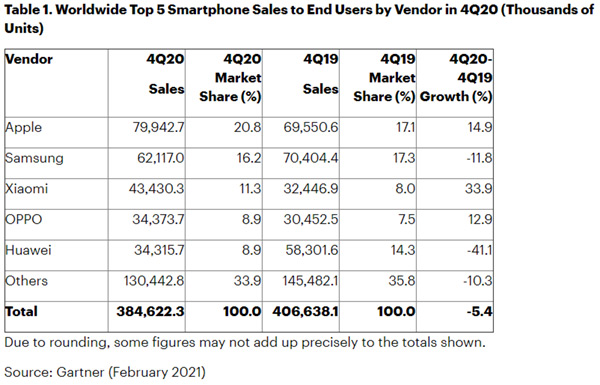 Samsung found itself in second space with around 62 million devices sold while Xiaomi was in third with 43 million devices. Samsung saw its market share fall by almost 12% while Apple’s increased by almost 15%.

Prior to the arrival of the iPhone 12 lineup we’d heard suggestions by analysts that we could see what they called an “upgrade super-cycle” and it looks like that’s exactly what we got.