Apple, Nintendo Announce Super Mario Run For iPhone, And Yes It Will Be Exclusive To iOS

Apple has opened today’s dedicated media event in San Francisco by announcing that Super Mario will be coming to the iOS App Store in the form of a new game titled Super Mario Run. The announcement was enough to raise excitement levels for the remainder of the event, but the bar was raised even higher with Tim Cook introducing the legendary Shigeru Minamoto to run through the initial introduction and presentation.

Rather than operating as a clone of the older Super Mario Bros games, Super Mario Run will take advantage of the iPhone display and iOS to operate as an endless scroller that sees Mario automatically whizz across a familiar looking environment in pursuit of those coins. Of course, Nintendo has intelligently stayed true to the original visuals and assets that made Mario so popular, meaning that its legions of fans who love and adore the franchise will likely flock to interact with the one-time purchase title.

Being an endless scroller, it may sound like there isn’t much to do except watch as Mario flies through the beautiful environment on the Retina HD display of the iPhone. Of course, as you might expect from a title that’s likely to garner millions of users worldwide, there’s much, much more to it than that. Users are invited to tap on the display at very specific timing points to make Mario jump to collect coins and mushrooms, and avoid obstacles. There’s also an excellent looking multiplayer mode that thrusts two individuals in a head-to-head collaborative mode.

As previously mentioned, unlike titles such as Pokemon Go and Miitomo, Super Mario Run will be offered to the App Store as a pay-once offering that then allows owners to play as much as they want without any additional payment. No in-app purchases, no subscriptions, and no promos spoiling the experience.

In addition to the Super Mario Run game, Nintendo will also be releasing a sticker pack exclusively for use in iOS 10 containing visuals and stickers of some of Nintendo’s most iconic characters. You can bet your mortgage on the fact that Mario will be front and center.

Super Mario Run will be available later in the year exclusive to iOS first with pricing of the one-time purchase still to be announced. 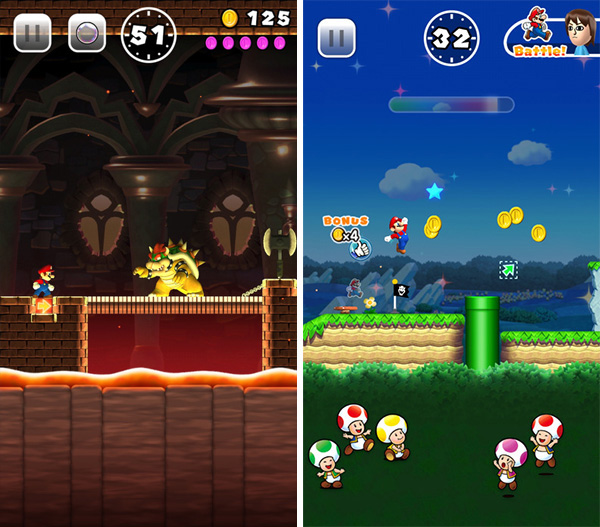 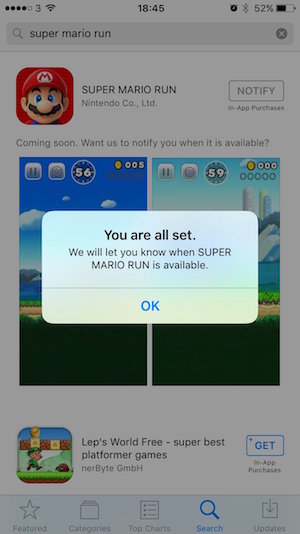