It appears that iPhone X delivery estimates have started improving for those who pre-ordered early, with some customers, including myself, seeing November 10 delivery estimate improve to November 3 launch day delivery.

As you may already know by now, According to the data collected by analysts, those who didn’t manage to get their pre-order in within first four minutes were out of luck for getting their order delivered in time for the launch day.

I personally managed to get my order in at 12:06 Pacific Time, which was around two minutes too late to get a launch day delivery, and saw the delivery estimate of November 10 to November 17 for a T-Mobile 256GB Space Gray iPhone X model from Apple.com. To my surprise (and delight!) though, when I randomly checked my order status a few hours back, I saw Apple automatically changed the delivery estimate of my order to November 3rd!

Multiple reports coming in from various social networks confirm the same as well. Apple is indeed improving delivery estimate of some of the early pre-orders, at least in the US they are! 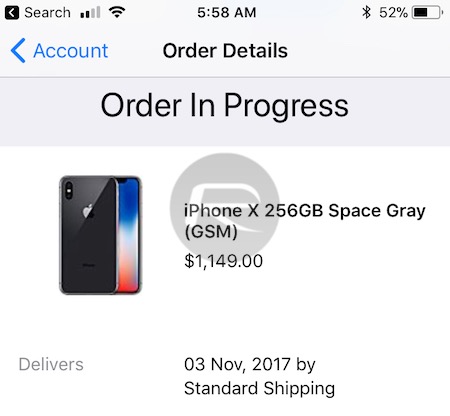 iPhone X pre-orders went live at mid-night on October 27 with unprecedented demand. Apple issued a statement earlier today saying that “customer demand is off the charts” for iPhone X, and that they are “working hard to get this revolutionary new product into the hands of every customer who wants one, as quickly as possible.”

Those who missed out on pre-ordering early may still have chance of scoring one on launch day, with Apple confirming that they will have limited number of units for sale for walk-in customers come November 3.