The next iPhone is the hottest topic of the tech world right now, and having been one of the top two smartphones since it first arrived in 2007, it should be of little surprise consumers are a little bit excited about the Cupertino’s next device. Many key elements are expected to change with the device – dubbed the "iPhone 5" – and among other things, the dock connector is said to be shrinking down.

A smaller port not only looks tidier, but saves a few vital square millimeters within the device for other hardware, and although we’ve seen conflicting reports regarding how many pins will be omitted from the current ensemble of thirty, it appears we may now have discovered the size of the port. 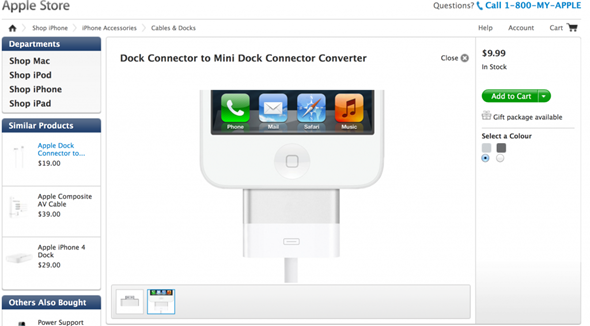 Blogger AWhiteDot has posted a video in which he showcases a leaked mini-dock to dock adapter he "found" on the official Apple Store site. The page he navigates to now displays a 404 error, and although it certainly appears legitimate, it’s hard to tell whether it’s a genuine leak or a really well put together fake.

If, as suspected the new mini-dock port does reach fruition, the adapters will be selling like hotcakes, and there’s no reason why Apple wouldn’t have accidentally leaked this information. The adaptor – as per the video – shows as being available in black and white, and with such an ingrained number of peripherals including the larger dock connector, one wonders whether Apple will consider shipping the connectors as standard with the next iPhone.

Highly doubtful, I know, and although the price is supposedly only ten bucks, it’s an additional cost beset by Apple on an already premium product, which will likely not go down too well with consumers. 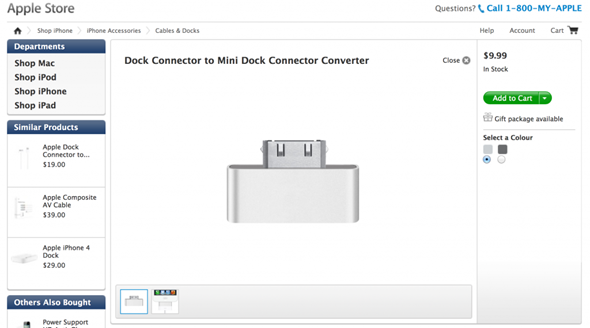 What do you guys think, is the leak the real deal, or is it just a nicely dreamed up, well-presented trick? It would only need a little web design nous to dress this up, and it’s certainly convenient given the current rife talk regarding the dock connector, so while we’re a little skeptical on this one, we wouldn’t completely discount it as being real.

Please feel free to leave your thoughts via the usual mediums below.