Apple Might Have Beaten Samsung In Smartphone Shipments For Q4 2019

Apple might have been able to move more iPhones than Samsung was able to move all of its phones combined during the final quarter of 2019. At the very least, the tally was equal according to a report by Strategy Analytics.

Based on the report’s numbers, Apple shipped 70.7 million units during the quarter, while Samsung came in with 68.8 million units. Apple found itself in number one spot for global smartphone market share at 19% while Samsung sat second with 18%. From there, it was Huawei in third with 15%.

Apple ‌iPhone‌ shipments rose 7 percent annually from 65.9 million units worldwide in Q4 2018 to 70.7 million in Q4 2019. This was Apple’s best growth performance since 2015. Apple’s global smartphone marketshare has lifted from 18 percent to 19 percent in the past year. Apple is recovering, due to cheaper iPhone 11 pricing and healthier demand in Asia and North America.

Apple doesn’t share iPhone sales figures anymore, leaving analytics firms to come up with the numbers themselves. That often leads to varying results with IHS Markit of the belief that the results were the opposite way around.

The firm’s numbers have Samsung on 70.7 million and Apple at 67.7 million. That would suggest that the real answer is probably somewhere in between the two sets of figures. Hence, a tie. 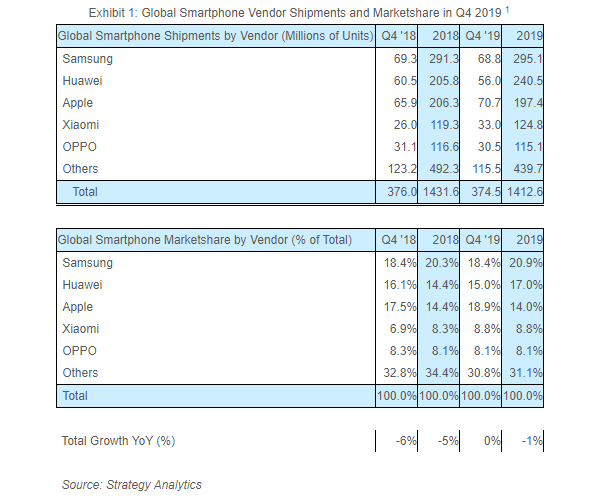 This all comes about after Apple’s iPhone saw impressive results in the final quarter of 2019, thanks in large to the strong performance of the iPhone 11.