Apple has delighted fans of the open-source world by taking steps to publish every single version of macOS and iOS kernel in an open-source capacity.

The publication means that each individual version of the company’s firmware kernel is now available online for anyone to download, inspect, and interrogate to find out more about how macOS and iOS are put together at the lowest kernel level.

Apple has always taken the public stance that “open source is at the heart” of the platforms that it builds. This includes operating systems and platforms which are used on a daily basis by users across the globe, including macOS and iOS, as well as server software like OS X Server and tools aimed at the development community, like the iOS SDK which contains all of the technologies and APIs that developers need to create cutting-edge apps.

In fact, Apple’s platforms are actually based on extremely popular open-source creations, such as the UNIX core. It’s for that reason that they are then pushed back and made available under Apple’s Open Source License.

With that said, and even with Apple’s public love of open-source, the development and research community has always had a problem with how long it actually takes Apple to publish something back to the community under the aforementioned Apple Open Source license. The publishing of macOS kernel source code up until version 10.13, and iOS kernel source up until version 10.3.3 should go some way to alleviating those complaints, and should definitely give developers and interested individuals something to sink their investigative teeth into. 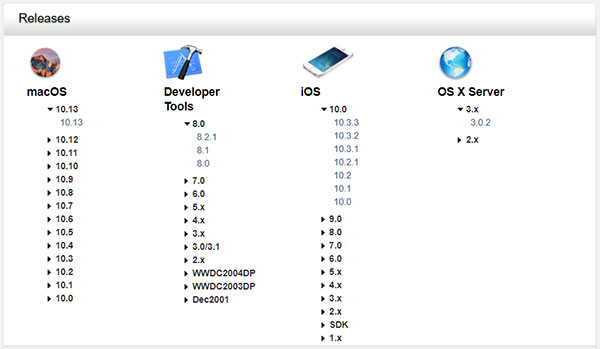 As mentioned, the Apple open source website has been updated to include open source kernel of macOS all the way up to version 10.13, which is the latest High Sierra, and iOS kernel up until version 10.3.3, which is the latest public build available for iOS 10. There’s no iOS 11 kernel source hosted on the page just yet but it shouldn’t be too long before that is made available to download as well. Clicking into each one lets you see individual aspects of the build and investigate them for educational purposes, which is perfect for those just starting out on this type of career or for students wanting to learn more.

You can find out more about the releases, including having the ability to download each version or individual parts thereof to your machine, over at opensource.apple.com.