Apple’s latest mice sensation – the multi-touch capable Magic Mouse introduced iPhone-style touch capabilities in the world of mice for users running OS X. This amazing product of engineering which is a multi-touch descendant of the iPhone soon became the heartthrob of Mac users. Since Magic Mouse is officially supported to work on Macs only, PC users running Windows were left out in the dark since there is currently no multi-touch capable mouse available for PC market. 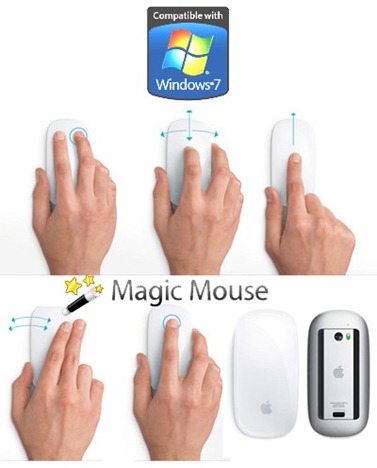 Good news is that the folks over at UneasySilence have managed to hack the driver to make it run on PCs running any version of Windows from XP to 7. Thanks to Apple for the Bluetooth driver update, and thanks to hackers for the hack which has enabled them to extract the two .exe files from the update so that Windows users can enjoy the taste of the first multi-touch capable mouse on their PCs.

Thanks to a little hackery from Apple’s Bluetooth Update (located here) the Magic Mouse driver was extracted via WinRar resulting in a 32bit version and a 64bit version that you can install on any ordinary Windows PC that will enable all the scrolling ‘magic’ of the Magic Mouse.

With the help of these modified drivers, you can use Apple Magic Mouse on both 32, and 64 bit editions of Windows XP, Vista and 7.